Walking and cycling to shops in Murska Sobota (Slovenia) 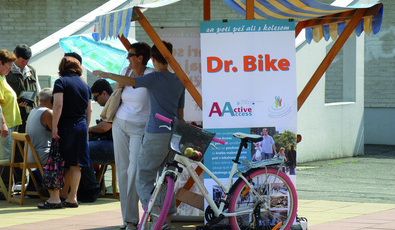 Within the IEE funded project Active Access, a campaign to encourage walking and cycling to shops has been developed and implemented for the first time in the municipality of Murska Sobota in Slovenia.

The Pomurje region of North East Slovenia is a predominantly rural area with 123,000 inhabitants. The regional centre Murska Sobota has a population of 15,000 people.
Traffic challenges in this relatively small town include parking space shortages, under-utilisation of public transport, walking and cycling route shortages and the general attitude of people preferring to travel everywhere by car. The town is a commercial hub in the region and has significant daily travel movement. The biggest shopping centre in Murska Sobota has on average 5000 customers per day but does not have any walking or cycling infrastructure.

The campaign “In Murska Sobota we shop on foot or by bike” ran for three months. Individual consultations and a media campaign encouraged 15 shop owners to join the project and provide coupons to people who walked or cycled to the shopping district. 10 coupons enabled customers to receive discounts when purchasing different products. At the end of the campaign period, a large event with media coverage was held to promote the concept and gain new participating members. Other activities supporting this campaign were:

A survey of over 100 people showed that almost 70% participated in the campaign. People reacted very positively to the campaign (85.2% satisfaction), though interestingly over half the respondents were from outside the city. The centre of Murska Sobota does not contain a hugely significant number of shops, so it is crucial that even more of the existing esablishments must become involved in the scheme if future success is to be guaranteed. In future it is advised that staff members should be more fully informed about the campaign. A stronger identity through logos, flyers and merchandising such as shopping bags is also recommended. There is, in addition, a pressing need to reduce environmental barriers to cycling and walking in the area.

The evaluation also showed that people who tried to cycle to shops underestimated the efficiency of cycling. 41% of these people stated that they thought cycling to the shops was slower than is actually the case. Furthermore, 3 out of 10 people believed that shopping by bike and bringing home purchased goods was more complicated and less comfortable than is actually the case.