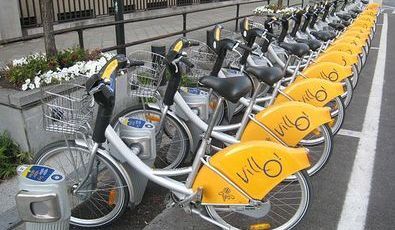 After an initial small-scale and unsuccessful attempt to install a bike sharing system in the city of Brussels, a new and improved scheme called Villo! was introduced in 2008 to cover the Brussels Capital Region. Villo! has substantially increased bicycle use in Brussels and is very much appreciated by its users.

Following the success of the Velo'v bike sharing scheme in Lyon, France, the City of Brussels decided to implement a scheme of its own in 2006 in order to change the mobility attitudes of itscitizens. The Cyclocity scheme, managed by JCDecaux, however, was unsuccessful because of its limited scope and uncomfortable bicycles. Bicycles were used only 0.25 times a day, amounting to less than 100 trips per day.

A new tender was released by the Brussels Capital Region for a region-wide system. Again, JCDecaux’s bid won, as they offered the best ratio between number of bikes and publicity, without the need for financial support from the Region. Villo! was launched in May 2009 in 4 municipalities of the Brussels Region.

The fully automated bike stations can be used with an annual card with pincode, or with a weekly or day ticket that can be purchased at some of the stations by bank card. Some bike stands are equipped with contactless card readers for annual tickets.

JCDecaux is in charge of the customer service and maintenance team and operates the Villo! website in Dutch, French and English [http//en.villo.be]. An extra feature on the website is the daily weather forecast for Brussels. Villo! can also be found on Facebook, Twitter and the AllBikesNow app for iPhone and Android.

In Brussels, there are 300 Villo! stations available, located every 450m, and 60 more will be installed by the end of 2013. In the whole Brussels region 420 parking spaces have been removed to make way for the Villo! stations, most of whichare in the city of Brussels (172).

An annual card costs 32 Euro, a day ticket 1.60 and a weekly ticket 7.50. The first half hour of each trip is free of charge, the next half hour costs 0.5 Euros, and after that, the price steadily increases with each extra half an hour. The costs are charged to the debit card. Holders of a day or weekly ticket can get a receipt when they return the bike, while holders of an annual card can check their account online. A 150 Euro deposit is debited only in the event of failure to comply with the general conditions of access and use, particularly failure to return the bike within 24 hours. Holders of a MOBIB card, the Brussels public transport smart card, get a one euro reduction on an annual card and can operate the Villo! stations with their MOBIB card, albeit with a separate pin code for Villo!.

The advertising space on the bikes and stations generates the necessary revenue for JCDecaux to operate the system. After a period of strong opposition by several municipalities of the Brussels Region, it was agreed that the municipalities can levy taxes on the advertising panels of the stations on municipal roads.

The Region supervises the system’s performance and, recently, a Villo-user committee was founded to involve users in the management of the scheme.

A survey of 600 Villo! users and 200 non-users in the summer of 2012 revealed that the average customer is satisfied with the service. The scheme receives a score of 8 out of 10 and some 80 percent of respondents say they cycle more often since the arrival of the Villo! scheme. Half of the users were not cyclists before.

However, Villo! does not manage to get people out of their cars. Only 2.6 percent of users would otherwise have taken the car, whereas 60 percent would have opted for public transport and 32 percent for walking.

The downside of the scheme is the availability of bikes, which causes problems for 12 to 18 percent of users. This will be tackled by increasing capacity at very busy stations and by introducing an “uphill bonus” of 10 free minutes for annual ticket holders returning their bikes to elevated stations.

A quarter of Villo! bikes were stolen in 2011 and one third in the year before. However, 70 percent of stolen bicycles are recovered.

Another problem is safety: a quarter of surveyed non-users say they are scared to cycle in Brussels. The Brussels Secretary of State for Mobility says this issue needs to be addressed by teaching people how to cycle in Brussels, e.g. through coaching programmes like Bike Experience (see Eltis case study 3443).