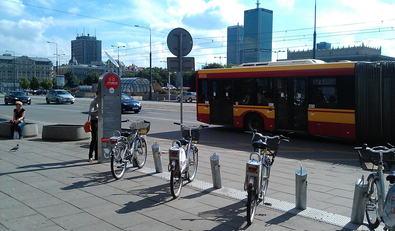 The largest Polish public bike sharing system has been operating in Warsaw since August 2012. The system is called Veturilo and it is implemented in the framework of the Public Transport Authority scheme. The bikes are available nine months a year, from March to November.

Making public bicycles available helps to fight the problem of traffic in the city centre and encourages people to change their everyday habits and switch to bikes and public transport. Veturilo bike stations were located primarily in the vicinity of metro stations and major transport hubs, and also within a few kilometres of them. The name was selected through an online vote on the Public Transport Authority website. In Esperanto, 'Veturilo' means 'vehicle' or 'means of transport'.

In action
The system is operated by nextbike, a public bicycle rental company that signed a contract with the City of Warsaw, valid until the end of November 2016, for about 19 million PLN (€ 4.5m). The company has municipal bike schemes in 10 countries, using a total of about 15 000 bicycles. In Poland nextbike also operates in Wrocław, Poznań, Opole and the Bemowo district in Warsaw. The Bemowo system is compatible with Veturilo and has 11 docking stations in the district.

The system was officially launched on 1 August 2012. In November 2012 a representative of the Mayor of Warsaw, Łukasz Puchalski, was appointed as responsible for bicycle transport. The Veturilo system is constantly expanding. Fourteen new stations opened in the Włochy, Ochota, and Ursynów districts and near the Galeria Mokotów shopping centre. In 2013 the first Veturilo station on the outskirts of Warsaw opened in Konstancin-Jeziorna and three new stations appeared in the Wola district. By the summer of 2013 there were 180 Veturilo and Bemowo bike docking stations with nearly 2 800 bicycles.
The prices encourage short trips - the first 20 minutes are free of charge; up to 60 minutes costs 1 PLN (€ 0.25); the second hour costs 3 PLN (€ 0.70); the third 5 PLN (€ 1.17), and the fourth and each subsequent hour 7 PLN (€ 1.16). For exceeding 12 hours there is an additional fee of 200 PLN (€ 47). To use the public bike one has to register and pay 10 PLN (€ 2.30), which can then be used towards rental.
Results
Although Warsaw's infrastructure is becoming more bicycle-friendly and new paths and lanes for cyclists are being created, it is still quite difficult to travel by bike. The bike sharing system and the development of cycling paths helps to increase the number of people using bicycles and public transport in Warsaw.
Public bikes are very popular among the citizens of Warsaw. When the weather conditions are good, there are on average 8 000 rentals a day. The current record for a single day is 12 123 rentals. The scale of interest in the use of public bikes indicates a change in the attitude of Warsaw residents towards cycling in the city. Warsaw citizens are changing their habits and are more often opting for environmentally friendly and convenient solutions.
In Depth
Topic:
Walking and cycling
Region:
Eastern Europe
Country:
Poland
City:
Warsaw
Contact:
Anna Wiszniewska
Author:
Anna Wiszniewska