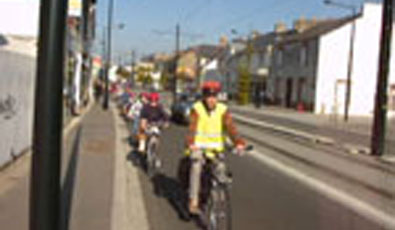 In order to reduce air pollution and traffic jams in school surroundings and to improve children’s physical condition, independence and traffic safety along school routes, the Greater Nantes Region promotes the introduction of cycling school buses or ‘Vélobus’.

A ‘Vélobus’ or cycling school bus is a small, clearly recognisable group of children that cycle along a known school route under the guidance of an adult. Like a real bus, fixed routes and stops are called at. But in this case not an engine, but voluntary adults accompanying the children to school are the motor of this bus.

In 2002, the Greater Nantes Region initiated this project in four primary schools, starting 20 cycling buses on Saturdays when traffic is less heavy.

Testing the cycling skills of participating children and increased traffic safety along the cycling routes, proved to be a very important condition for accompanying adults to join the project. So, helmets, reflecting flags and clothing were provided to the participants. Further, before joining the project every child was obliged to pass a test regarding cycling skills and knowledge of traffic regulations.

Every month, the Greater Nantes Region organised free meetings were the project was explained to all interested schools in the region and they were encouraged to start their own ‘Vélobus’.
The Cycle train projects have been introduced in many other European countries. In Belgium they have been running for more than 10 years and still show a great increase in interest and results.

In 2002, the Greater Nantes Region initiated the project ‘Vélobus’ of cycling school bus in four primary schools where they started 20 cycling school buses. In total, 40 voluntary companions (parents and teachers) joined the pilot project involving 130 pupils. Results show that on average, school routes are 2 kilometres long and take 10 to 20 minutes to cycle.

Figures of 2006 indicate cycling school buses were being organised in 14 municipalities in 30 schools in the Greater Nantes Region involving 762 school children.