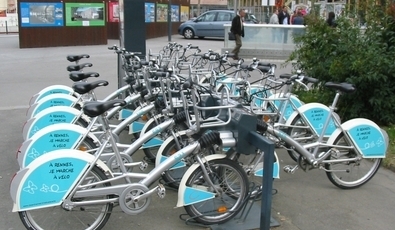 The Vélo à la Carte service that started in 1998 was located in Rennes, France, where it was implemented to provide a sustainable form of urban transport.

Vélo à la Carte was a smart bike system that works with fixed racks and magnetic strip cards for the check-out and return of the bicycles. The service was used for a variety of trip purposes, e.g. trips to work (24%), school or university (15%), for leisure activities (22%), shopping trips (27%), just for exercise (2%) or other purposes (10%). In 2009, the system was replaced by the Velostar system.

Vélo à la Carte worked with fixed racks and magnetic strip cards for the check-out and return of the bicycles. The racks contained a controller, which consisted of a GSM modem, a CPU (Central Processing Unit), a card reader and a power supply. The bicycles, that had a special design, were equipped with 2 microchips . A central computer downloaded information stored in each docking station, using GSM, authenticated users’ smart cards and compiled user and rack usage data. Furthermore, a dispatch vehicle was in use, that enabled the transport of bikes from full racks to ones that are empty or to the repair centre. The vehicle was linked to the racks through SMS communication that could notify the status of a bike at any given location.

The scheme was free of charge to the users, requiring just a one-time refundable deposit of 23 €. The use of the bicycles was limited to 2 hours, but multiple loaning was possible throughout a day. Users had to register and received a magnetic strip card which served to check-out the bicycles at the racks. Many of the bicycles loaned were located at a bus interchange point following a park-and-ride pattern and 69% of users were using the bicycles along with other means of transport.

Vélo à la Carte was started as a partnership between the City of Rennes and the commercial company Clear Channel Adshel, which is the street furniture brand of Clear Channel Worldwide, an out-of-home advertising company.>Clear Channel offers the smart bike system to local authorities that are also using other services of the company. The company was responsible for the implementation and operation of Vélo à la Carte in Rennes. Their services were paid for through advertisements which appear on outdoor furniture, funding also the smart bike programme.

In 2009, Vélo à la Carte was replaced by a new public bike system called LE vélo STAR; operated by Keolis, the operator of Rennes' public transport network STAR. It counts 83 stations throughout the city, located strategically in function of the public transport network and the needs of different parts of towns. Users can subscribe for a year (€30 or €20 for STAR season ticket holders), a week (€5) or 1day (€1). The first half an hour of each cycling trip is free of charge. The Velostar system is included in the multiple smartphone applications for the STAR public transport network.

The Vélo à la Carte scheme was quite successful. 200 bicycles were available in the city centre of Rennes at 25 docking racks. 2,500 access cards had been distributed and in 2004, over 63,000 trips were recorded. For Clear Channel Adshel the service was beneficiary as it added value to their street furniture programs as additional amenity that is provided at no cost to local authorities. The city of Rennes benefited from the increased mobility choices for its citizens. This win-win situation was a good precondition to run the services in the long run.

The Vélo à la carte system was part of the innovative transport concepts in the NICHES project.