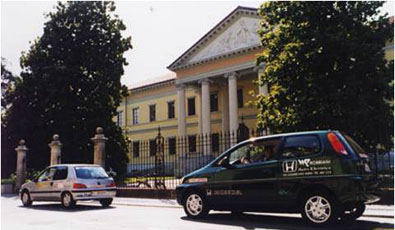 VEL1 was the first and so far the biggest project about electric vehicles, which was initiated by the Swiss government and carried out in Mendrisio (Switzerland) from 1994 until 2001. All in all approx. 400 vehicles from different producers were used within an area of 20,000 inhabitants. Local politicians and regional famous people were involved into the project out of marketing purposes.

The project was started as early as 1994. It was carried out in the community of Mendrisio, which is located in the South of Switzerland and has a population of 20,000 inhabitants. Major target was to be world wide the first community to practice and proof that electric vehicles and the respective infrastructure are working in reality. The project was initiated by the Swiss government and Mendrisio won the contest for the project against 33 other communities.

The staggering number of 400 electric vehicles were sold to an extent of 2/3 to private customers. The big advantage is that there was a broad variety of vehicles and storage systems. A lot of education was made to teach the clients how to save energy while driving, when to recharge the batteries with the cheapest tariffs or how do drive a car to make it noiseless.Concerning the infrastructure it is a key success indicator to start with the establishment of the infrastructure as early as possible to reduce the fear of the clients concerning the range. Additional it is very important to offer a full mobility guarantee to the clients to be able to cope with long distance drives or car sharing. Home charging systems were installed and with the help of intensive training people were taught to use those tools.Concerning sales the project was also very well structured and for this reason favourable for the customers. The clients had the possibility of 3 testing days before purchasing, there was an attractive possibility>to resell the vehicles to minimize the risk for early adopters and last but not least important was a clearly structured bureaucracy including financial aid from the public and its preconditions.

400 EV were sold within an area of 20,000 inhabitants, which has brought a market share of 8%. Interesting statistics were generated, such as that 89% of the time the vehicle is parked. 9% of the time the vehicle is charged and only 2% of the time the car is used. It was very important for the project that there was a variety of brands and products to minimize the threat of being dependent on one single producer.Additional boost for the selling of the vehicles was the battery renting system, which decreased the initial purchase costs. The total amount of charged energy is 4,260 kWh and the charging was done with 2/3 probability during day time (all amounts are referring just to the open access charging points). Local politicians and regional famous people were involved into the project out of marketing purposes.The follow up project VEL2 (2001-2005), targeting 4000 vehicles in the Tessin region, was experiencing a heavy down-swing of electric vehicle appreciation and thus the number of vehicles stayed at 400. The Na-S battery technology developed and tested then is still used in projects like VLOTTE.In Mendrisio also a light vehicle fleet was rolled out with the help of partial 50% financial support. The charging infrastructure proved to be lasting (15 years of operation) but necessary more for psychological support when buying an electric vehicle.