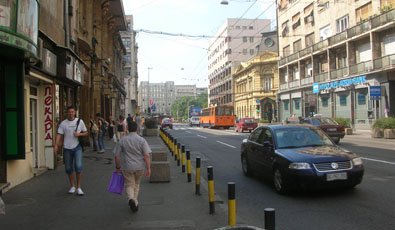 Congestion in the relatively small city centre of Belgrade raised public interest and made city authorities undertake mobility management measures. The aim of this measure is relief of Vase Carapica St. and Student’s Square that are nearby existing pedestrian zone by reducing and calming some modes

There are 23 lines of public transport passing through this traditional central part of the city - 16 bus lines and 7 trolleys. 15 lines of public transport departure from the Square and they are also going to be relocated, so the buses will get the passengers in nearby Francuska Street.
At the moment, on the terminus at the Student’s Square, in Vase Carapica St. there are the terminuses of 7 trolleys and one bus line. From Boulevard of Despot Stefan to Student’s Square in both directions, moving is allowed only for public transport and taxi vehicles.
Objectives of this measure:

Institute for City Planning of Belgrade made a detailed plan regulating this part of the city. Street and traffic layout had to be changed in order to fulfill mentioned objectives with focus on the Square of Republic as pedestrian zone. Bus terminuses at The Square of Republic was closed.
Vase Carapica St. is opened only for public and taxi transport and restriction of access is for private cars from nearby streets. Vehicles supplying shops, companies and other firms that have their seats in one part of the street are allowed to enter only with special permission of Secretariat for Transport.
However, the common lack of discipline of Belgrade drivers and the absence of reaction from the traffic police disturbed these plans. Private vehicles are still circulating through these streets, so the traffic is extremely slowed down.
With the program from the plan of the area around The Square of Republic it is suggested to change the whole complex of 3.86 hectares, starting with Kolarceva St. into a pedestrian zone. That means, in some subsequent phase, to completely expel the vehicles from the very city center, with eventual possibility of keeping only minimum of public transport and turn this zone into car-free and pedestrian zone.
Some communication trenches will get one additional traffic lane according to the new plan, like Vase Carapica St., while greenery is planned in other streets. Terminus at the Student’s square is planned to be relocated and bus and trolley lines will be extended.

With the implementation of this measure the relation between pedestrians and drivers is regulated. Concerning the costs, this measure does not require large investments. It is only needed to induct discipline and strict obey the rules.