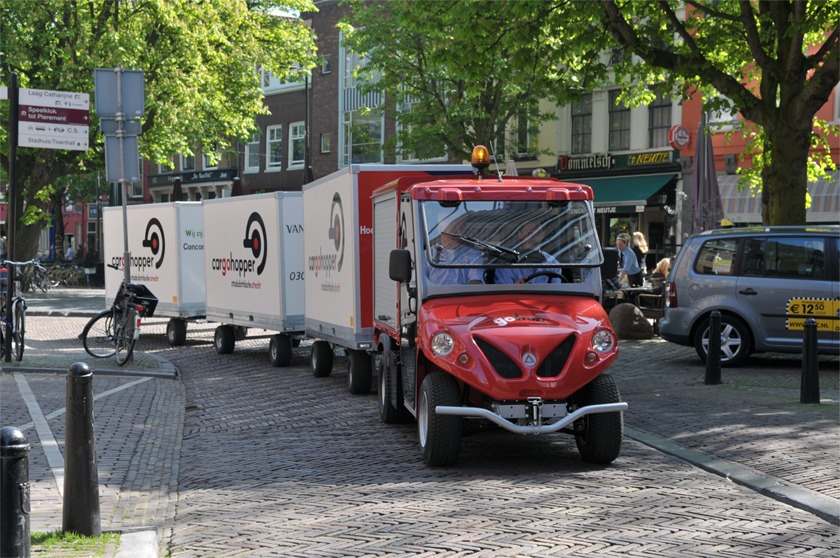 The city of Utrecht is a densely populated city, with its centre being of major historical and cultural importance. But its ancient streets are being damaged by traditional forms of road freight transport. To tackle this problem the city introduced two new and innovative methods of transport: the waterborne electric Beer Boat, and the solar-powered electric freight road vehicle known as the Cargohopper. This has resulted in a reduction in emissions, noise and freight traffic, and increased the safety and quality of life for city residents.

Utrecht is the Netherlands’ fourth largest city and the capital of Utrecht province. It has a population of 328 577. By 2025 it is expected to rise to over 392 000. Utrecht plays a central part in Dutch commerce - but its freight distribution, with heavy vehicles causing damage, noise and air pollution, became a major concern for residents and posed a threat to the fragile buildings and streets originating from the Early Middle Ages.

In 2008, with the help of the CIVITAS MIMOSA project, Utrecht produced a freight distribution plan. Measures to improve freight logistics with the involvement of and co-operation between companies were put in place, including time restrictions for vehicles entering the city and the designation of low-emission zones.

However, more was needed to keep Utrecht accessible and sustainable, so in co-operation with MIMOSA, it introduced two additional measures as part of its 2011 Action Plan Freight Transport.

Utrecht previously used a diesel-powered canal boat to transport goods to nearby businesses, but in an effort to make this mode of transport cleaner, the city went about developing a zero-emission electric boat. Studies showed that a zero-emission electric boat would reduce the environmental impact of Utrecht’s existing diesel boat dramatically, so the € 600 000 funding for its development came out of the city’s air quality improvement budget.

Utrecht’s new vessel, dubbed the Beer Boat, was introduced in January 2010. Owned and run by the city, and with an expected 30-year life span, it makes six trips during four days supplying more than 60 catering businesses. Another clean vehicle introduced in Utrecht under the MIMOSA project was an electric-powered delivery vehicle. Called the Cargohopper, it was launched in April 2009. It is 16 metres long and 1.25 metres wide, making it easy to maneuver through Utrecht’s small and delicate inner-city streets.

The CO2-neutral , € 60 000 multi-trailer is owned and operated by a private transport company, the Utrecht-based Hoek Transport, and moves cargo twice a day making about 40-50 parcel deliveries each day. In August 2009 it was made into an even more sustainable form of freight transport and transformed into a solar-powered vehicle. Six solar panels were installed on the roofs, costing a total of € 15 000.

The Cargohopper was so successful that in autumn 2011 Cargohopper 2 was introduced. Already an improved vehicle compared to its predecessor, it has one solar panel integrated in the roof. In addition to delivering parcels, it can now also move pallets and other long objects, and travel 250 km without recharging.

As a cost-neutral vehicle, the Beer Boat is expected to make a profit on rental revenues, although it did not during the 4-year length of the MIMOSA project, which ran from 2008 to 2012. However, the environmental results of its transformation from a diesel-powered vessel to an electric powered, zero-emission boat are striking.

The introduction of the Cargohopper, meanwhile, has seen fewer freight-vehicle trips by diesel vans or light trucks in Utrecht. During the MIMOSA project, the number fell by 4 080 – that’s 88 332 fewer kilometres being driven by vehicles spouting dirty and harmful air. This resulted in a 73 per cent (5.8 t) reduction in CO2 emissions, a 56 per cent (0.001 t) decrease in PM10 emissions; and a 27 per cent (0.005 t) fall in NOx emissions.

And not only does the Cargohopper, in all its forms, contribute to cleaner air in Utrecht: it also reduces noise, and increases the safety and overall livability of the city centre. Because of rapidly evolving technology, the owners have estimated the lifespan of the most recent Cargohopper at five years – although it designed to last longer.

A challenge faced by makers of the Beer Boat is that it is not efficient as it could be as companies refuse to share deliveries with competitors in fear of giving away sensitive business information. But because reducing emissions is so important to the city, the Beer Boat continues to function.

Dymph Hoffmans, Utrecht’s transport program manager, says that a vessel like the Beer Boat can only be of use and transferrable when a city has shops and cafés which are accessible over water. But the Cargohopper has proven to be very transferrable and has been adapted by other Dutch cities like Amsterdam and Amersfoort. Both measures, however, pose challenges.

‘Many of the challenges we had at the start of these projects are still challenges today,’ says Hoffmans. ‘It is important to find common goals, for the city and for partner companies. For example, for the projects to succeed, sustainability and company efficiency have to coincide. In practice, this is often difficult.’

The city, being able to pass legislation, changed laws and regulations to give companies that embraced sustainable forms of transport economic advantages over companies that didn’t. The best strategy, Hoffmans says, is to agree on a long-term goal, work backwards to a plan of operation and bridge the gap between different stakeholders. Thanks to this learning, Utrecht is already in early discussions with stakeholders over its plans to be an emission-free city by 2020, with new measures already expected later this year.