Utrecht's SUMP: moving from theory to practice (the Netherlands) 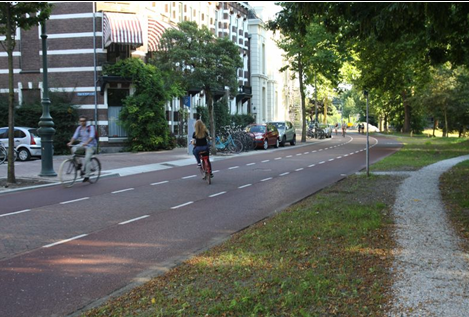 A new and integrated planning approach is required for designing the cities of the future. Utrecht recognised this and adopted the Sustainable Urban Mobility Planning (SUMP) framework.

This case study outlines how Utrecht moved from developing its SUMP to making practical design choices and implementing measures to create a healthier and more sustainable city. The changes these decisions instigated in public spaces and their positive impact on sustainable mobility are also shown.

Utrecht is the fastest growing city in the Netherlands: its population is expected to exceed 400,000 by 2030. Combined with this, Utrecht’s public transport system is running at capacity. Over 100 buses per hour cross the city centre to reach Utrecht Centraal station, Utrecht's main transport hub. Current demand is overwhelming both the public transport network and the station.

The current challenges and future expansion necessitate a different approach. This case study sets out the differences between the old approach and the new SUMP-based approach.

These trends have influenced Utrecht’s SUMP. The new plan not only focuses on creating the desired transport system, but also the desired city. Mark Degenkamp, Senior Policy Advisor for the City of Utrecht, explains: “By shifting the discussion from being solely about mobility to the quality of urban life (with mobility choices derived from this), the SUMP received political backing.”

All policy choices made within these areas must be based on an integrated approach incorporating mobility and spatial development concerns.

The SUMP has led to numerous practical changes which have impacted on Utrecht’s public spaces. Some of the measures implemented include:

Redesigned public spaces mean more space for walking, as well as improved pedestrian crossings. Mark Degenkamp comments: "Walking is not traditionally considered a ‘real’ transport mode in the Netherlands. We changed that in our SUMP.”

Utrecht has created a new series of bike routes. Although they form part of the main network, they also constitute a smaller one themselves. They focus on avoiding crowded places and linking economic and transportation hotspots. Furthermore, they have improved regional cycling connections.

Research has shown that 25% of cars on busy roads neither intend to start nor finish their journey in the surrounding area. It was therefore decided to limit road traffic capacity to vehicles moving in and finishing their journeys in the city. Those not doing so are now directed to Utrecht's ring road, which freed up roads for redevelopment. Traffic lights have also been synchronised to speed up travel on the quickest routes.

A 30km/h speed limit is now standard: all roads except some main traffic arteries now have it. This increases safety levels due to the smaller speed difference between pedestrians, cyclists, and cars. The journey times of cyclists and pedestrians relative to car drivers also improves, thereby making walking and cycling more appealing.

Rapid changes in the use and application of mobile and electronic devices are changing how people travel: app stores and the internet are full of mobility solutions facilitating sustainable and active travel. The City of Utrecht encourages its staff to experiment to ensure that it takes advantage of such developments.

A new approach to work

The SUMP necessitated a new way of working. Mark Degenkamp comments: “Every situation now requires a unique solution. Standards, once the guiding principle for traffic engineers, do not always work now. Whilst colleagues had to get used to that, the new approach ultimately offers more flexibility.”

Utrecht has changed the way it conceives its mobility measures. The focus is now on users and the public: fulfilling their needs and improving their quality of life now drive measure development.

An example of user-centred design

A reactive approach to problem-solving was the previous norm. When  urban planning decisions led to traffic build-ups, transport and traffic experts were called in to remedy the resulting environmental and safety issues.

However, it has become clear that mobility and transport are prerequisites in planning sustainable cities. Instead, planning should instead be proactive and build in solutions to likely problems from the outset. The most effective way to identify these potential issues is to use a broad, interdisciplinary approach.

A transport or mobility expert can have far more impact if they work together with professionals from other disciplines. In the case of traffic,  information on the size and composition of traffic flows can inform planning in other areas.

To look at Utrecht's SUMP, click here (in Dutch).