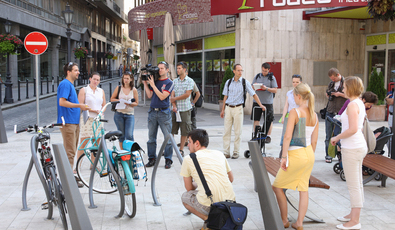 The IEE funded project Active Access aims to encourage walking and cycling for short trips, to improve health and the local economy. Walking audits were successfully used as a tool to gain the support of local stakeholders for the project and for active travel modes in general, in the 11 application partner cities.

The IEE funded project Active Access (2009-2012) aims to encourage walking and cycling for short trips to improve health and the local economy through numerous activities and campaigns taking place in 11 cities and regions throughout Europe. These activities are centred around four approaches; walking and cycling for shopping, to school, for work and for leisure. At the beginning of the project, support for and political credibility of, walking and cycling was low in many of the application partner cities/regions. Therefore, in order to prepare the ground for the project and gain support from local key stakeholders, one or more walking audits were conducted in each application region to raise awareness of active travel modes and the need for activities to encourage their use.

Project partners were trained by walking expert and Active Access partner Walk21, on how to conduct a basic walking audit in their local region and given tips on how to engage stakeholders who may be hesitant at becoming involved in such issues. A walking audit guidance document was also produced and is available to download from www.active-access.eu As the aim of the Active Access project is to raise awareness and support for active travel and encourage its use, rather than directly fund infrastructure for walking and cycling, partners were encouraged to conduct ‘people centred audits’ as opposed to a full ‘technical audit’. This involved partners inviting key stakeholders (e.g. politicians, technicians, trade and shop associations, schools, police, press) to walk together on a pre-established route which had significance in terms of their planned Active Access activities. During the walk, partners highlighted positive and negative issues relating to the walking and cycling environment (issues with safety, infrastructure etc) as well as encouraging the stakeholders to identify such issues themselves, gathering opinions, feelings and ideas and sharing aspirations for change. Following the walking audit, stakeholders were invited to a round-table discussion to go over the points raised in the audit in more detail. This also provided an opportunity to inform stakeholders about the activities planned within the Active Access project.

The cost of preparing and conducting such audits was low, limited to the time of the project partners and participants. The main barriers encountered were finding a time when all stakeholders invited were able to attend.

Reaction of those that attended the audits was overwhelmingly positive. In cities where cycling or walking is not yet supported, the walking audit was a useful starter: It showed decision makers and technical civil servants the needs on the ground and the possibilities that can be offered to local people. Audit attendees were also prompted to reflect on their own active travel behaviour and how they could increase walking and cycling in their and their families daily lives. In addition to improving awareness of mobility issues, the walking audits achieved some immediate improvements e.g. in Egkomi, Nicosia as a result of the audit the municipality agreed to change the pedestrian crossing times, remove obstructing trees and fix broken pavements; in Budapest they agreed to establish new bike racks and do some painting to improve the walking environment whilst in Annecy better signposting for cycling routes was agreed. This shows that audits can encourage authorities to make simple cheap improvements very quickly. These improvements may act as an impetus to introduce similar changes in other areas of the cities.

Some months after the audits, partners were asked to reflect on their effectiveness as an awareness raising tool. 70% of partners rated walking audits as an effective tool for raising awareness and building political support for walking and cycling and 90% stated it was effective for transferring new ideas about active modes. The main reasons given for its effectiveness were that it allowed stakeholders to physically see the problems for themselves, it promoted municipalities to act immediately, it attracted media attention and it bought together different groups of people and stakeholders, establishing new working relationships. The main criticisms of the audits were that stakeholders wanted more concrete, measurable results such as those resulting from a technical audit.

Walking audits provide a cheap, quick and effective way of engaging stakeholders on the issues of walking and cycling and gaining their support. Using the walking audit guidance produced in the Active Access project will allow other cities to easily replicate the audit process and provides information and links on how to conduct more technical audits should this be required. Details of all the audits conducted within the Active Access project can be downloaded from the project website www.active-access.eu with a summary available in EN, DE, ES, FR, HU, RO, HR and CY-GR.