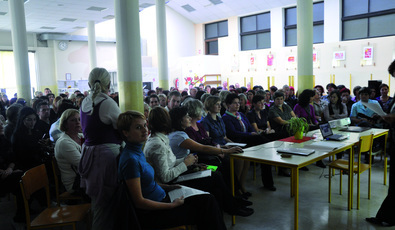 Schools in Murska Sobota are fully aware of the problem of too many parents driving their children to school by car. They decided that they needed a tool to raise awareness among parents and start an attitude changing process. A short film was duly developed to address this need.

Schools are facing major problems that are often visible in the form of large traffic jams in front of schools and in surrounding areas. Parking on footpaths and bicycle tracks also represents a problem because of the increased risk of accidents.

Schools in Murska Sobota are fully aware of this situation and wanted to come up with a tool through which it was possible to raise the awareness of parents in terms of this issue, especially those who consistently drive their children to and from school.

Within the IEE funded project Active Access a small film was developed which was directly used as this above mentioned tool.
The film includes:

The film was presented at 5 primary schools. Around 500 parents and 100 teachers/principals have seen the film. It is visible on all five schools websites and on the CHD MS website. Furthermore it was decided that the film should be presented to the wider public - in this way it was possible to reach an additional audience of thousands more people.

After the presentation of the film discussions took place whereby parents were asked how they had travelled to school when they were young. The parents happily related their stories which led to a very positive atmosphere. They also started to realise where they are making mistakes today by driving their children to school. The film contributed to awareness raising and learning. It has to be acknowledged that a lot more small steps in the right direction are still needed in order to reach the main goal – “A reduction in motorised traffic near schools and their surrounding areas”.
Film: http://czr.si/film-po-poti-srckov.aspx