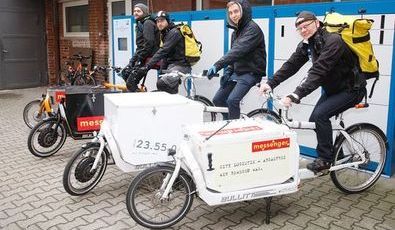 In the framework of the EU FP7 co-funded CityLog project, the city of Berlin Berlin aims to improve its logistics system by applying innovative cargo load units jointly managed by different urban freight operators. The BentoBox system is made of a modular pack station with removable trolleys and works like an additional urban hub, organising distribution and collection more efficiently on a smaller scale. It can be applied in all densely populated urban areas with high delivery volumes like dense residential areas, shopping malls or areas with a high number of offices.

The BentoBox was initially set up in Berlin in December 2011 to test its integration into the operations of courier, express and parcel (CEP) services’ daily business.

The prototype of the BentoBox was introduced in Friedenau, a densely populated and diverse area of Berlin. The BentoBox is used as a transfer and consolidation hub (similar to a Packstation) to collect and pool shipments delivered by a number of service providers.

This works in two ways: deliveries addressed to as well as deliveries originating in the neighbourhood are collected in the BentoBox and repackaged before their ongoing delivery. As a consequence, collection and delivery within the neighbourhood can be carried out using vehicles which are more suitable for inner city areas such as cargo bikes.

The cooperating local CEP service provider ”Messenger” has integrated the BentoBox into its daily logistics operations.>“Messenger” works with 140 courier businesses across Berlin and has applied the box beyond the pilot neighbourhood scheme: night time deliveries from Berlin’s whole Western inner city are collected in the BentoBox and delivered to the company’s central deposit in Tiergarten using an electric cruiser. From there they continue to their national or international destinations.

Eventually, the BentoBox should work as an open platform and hub between CEP service providers and customers. Currently, access for end users to the BentoBox is being tested so that private or business users can pick up or release deliveries directly at the box.

Including the BentoBox in logistic processes did not cause errors or delays. Operations were not hindered even during the traditionally busy period before Christmas. Including overnight mailing collections doubled the number of deliveries processed per day.

First results of gps analysis show that almost all trips in the selected neighbourhood previously made by car could be replaced by cargo bikes. Also, by pooling several orders the number of absolute trips was reduced.

The BentoBox is Europe’s first prototype of a flexible collection station for packages. Combined with the deployment of innovative cargo bikes, quick, cost efficient, emission free and almost silent distribution of goods can be achieved in Berlin and can be achieved elsewhere in dense urban areas. In 2012 the prototype of the BentoBox system was also tested in Lyon (France) and Turin (Italy) where the BentoBox evolved into a pure docking station with removable trolleys to be handled by couriers.