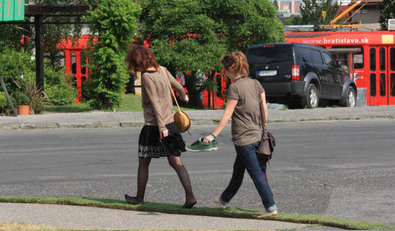 The Urban ET Festival was a fun and creative public event with the purpose of bringing back life and social interactions to the car-dominated streets of the Slovak capital. It not only raised public awareness but also gave important impetus to decision-makers.

Like in most European cities, public space in Bratislava tends to be allocated to cars in the streets. Only in those cases where “space is left” is the road space is allocated to other uses: bicycle paths or green areas. However, public space has a much more important role than just being something to pass through. This is how the idea of the Urban ET Festival was born.

In June 2012 the students of the Spatial Planning Department of the Slovak University of Technology, together with the architecture bureau 2ka, organised the Urban ET Festival in the Ra?a district of the city. The basic idea behind this festival was to introduce social interactions into public spaces. Although the main focus of this festival was on social activities, spatial planning and fun, it did have some components that relate to urban mobility. As part of those activities a demonstration area was chosen and the road space was reconfigured in a way that seemed more reasonable to the diversity of road users. A 1.2m wide “multi-lane” was created, which was taken out of the 3.5m wide road, which was originally entirely allocated to cars. This multi-lane essentially follows the concept of shared space, and it can be used in any way: by pedestrians, cyclists, public transport - or cars.

The motto of this action was based on a statement made by the famous city planner, Alexandros Washburn: "When you feel good on a street of a nice city and you are in a good company - it is always a walking experience." Washburn always emphasised the importance of designing quality public spaces. He said: "Do you want to build a house? First design a trail."

The Urban ET Festival was a good opportunity to collect public opinion about how people feel about the distribution of public space, and what they see as the key mobility problems in Bratislava. After the final evaluation of these results by far the most comments were collected about the untapped potential for urban cycling and the need for more cycling infrastructure. The Urban ET Festival has definitely introduced a lot of creative and fun activities to the streets of the Slovak capital, raised public awareness, and it also yielded important information about public opinion for the city’s urban planners.