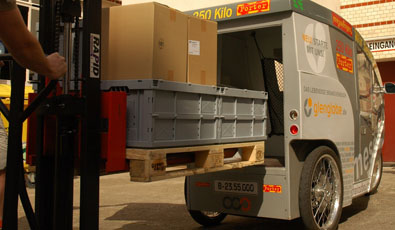 As the transportation of cargo is increasing especially in cities and thus hinders traffic and harms the environment, the city Berlin/Germany came up with new innovations to solve this problem. The Cargo-Cruiser, a three wheeler with a width of approx. 1.2 meters, that operates as a heavy good transporter- was tested and introduced by a messenger company in the city.

"Messenger" a courier company aspires to provide services with low ecological impact. The Cargo- Cruiser seems to be a good option to create less-polluted areas and provides a economical more profitable traffic concepts. The cruiser is the first zero-emission cargo vehicle in daily use in the Low Emission Zone in Berlin. Although it can load up to 250 kilograms, the Electro-Cruiser is seen as a legal bicycle offering the possibility to drive round traffic jams on the cycle path, a big advantage compared to cars.

The Cargo-Cruiser was introduced in Berlin after a test stage of 10.000 kilometres by a messenger company in November 2007. The company operates bicycles and cars in various German cities. The Cruiser can carry europallets with a weight of up to 250 kilograms widening the range of goods possible to carry by bike significantly. The driver and the cargo are fully encased and thus weatherproof. Due to an electric motor the Cargo-Cruiser reduces the physical effort of the driver at a speed of 24 km/h by about fifty percent.

The cruiser is equipped with a electric motor providing a maximum torque of 90 Nm and Lithium-Ion accumulators with 1150 W nominal capacity.>One of this accumulators facilitates a range of coverage of about 40 kilometres on almost flat topography like in Berlin. Total cost of the cruiser designed or the requirements of the company amount to 11 000 Euro (including second Lithium-Ion accumulator). Manufacturers release for the accumulator cover 1200 charging cycles corresponding with a durability of tree years. Exchange of one accumulator costs 1000 Euro.

As the Electro-Cruiser has an energy consumption that equals 0,5 litres of gasoline per 100 kilometre it is, if charged with regenerative energy, not only free of CO2, but since the cruiser is nearly free of maintenance requirements also economically more valuable than conventional vehicles. Daily average range of operation in the Low Emission Zone of Berlin is 80 kilometres requiring two regenerative energy driven accumulators.

The operator (messenger) is confident that in the next fife years about 20 percent or 200 vehicles of common transporters can be substituted by Cargo- Cruisers. The manufacturer of the product (a company from Berlin, Germany) states that they already have a order from the Netherlands and even requests from New York.

As there are many problems concerning particulate matter, nitrogen oxides and noise related to transport and light duty commercial vehicles in cities in particular the Cargo-Cruiser can significantly support mitigation of these problems.