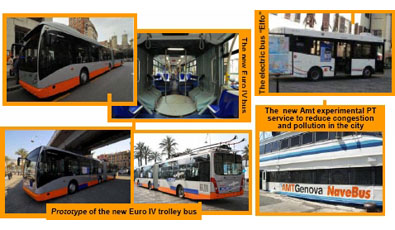 The Amt’s Business Plan 2007-2010 and the relevant Investment Plan (approved by Genoa Municipality) has committed to the renewal and modernisation of its vehicles fleet.In accordance with the shared objectives of Genoa Municipality and Amt and in the spirit of CiViTAS CARAVEL project the new vehicles will be fitted with more ecological motors.

Implementation of a transition strategy to attain a fleet that is totally eco compatible.

In order to reduce pollution in the city (and along the two valleys and in the west and east sides) the strategy stated in the Amt’s Business Plan (and the relevant Investment Plan) is to renew the fleet by the introduction of EURO IV buses (if available buses better than EURO IV as Euro V/EEV) and the extension of ZEV (Zero Emission Vehicles): trolleybuses and metro trains. This target has became feasible due to the extension of the underground and trolley bus lines.About 100 new vehicles ecologically friendly will enter in operation between 2007 and 2010.The transition strategy towards clean fleets ecologically includes the substitution of a diesel operated bus route in Nervi with electrically operated special buses that can be inductively recharged.Amt will continue to use minibuses that are able to operate on both diesel and methane gas for Amt’s Drinbus service (direct service request by a phone booking) and will continue to study how to broaden use of methane gas on part of the fleet.

Acquired 46 new Euro IV vehicles (14 large articulated buses; 17 articulated bipowered trolleybuses; 9 medium size buses; 5 small size buses)The above 14 new large clean Euro IV buses have been delivered and are under operation in the high mobility corridor network.>An international tender for the purchase of a second lot of 20 buses Euro IV 18 meters long with a strong preferences to whom can present buses better than Euro IV (as Euro V/EEV) offer is on going.Completed the work to renovate the trolleybus line (from Foce - in downtown area - to Sampierdarena - in the west part of Genoa). The trolleybus line is now under operation with the existing trolleybuses (the delivery of the above new 17 Euro IV trolleybuses 18 meter long will be completed during the first months of 2008). Planned and implemented the promotional campaign for the launch of the new trolleybus line. Moreover on the occasion of the second Anniversary of the Kyoto Protocol organized the promotion of free travels on the trolleybuses for all day .The recharging station for the electric buses in Nervi is completed. The operation with the electric buses (named Elfo) in this area will start within 2007 substituting the traditional diesel operated buses.Moreover, as a part of the transition strategy plan a new innovative service has been designed in order to improve a sustainable public mobility, to improve a sustainable public mobility, to promote the use of a multimodal public transport - managed by Amt - as a better ecologically alternative reducing the private traffic, the pollution and the congestion in the city: an experimental and innovative public transport service travelling by sea (Navebus) paying only the price of Amt’s bus ticket. This new Amt’s PT service is now under operation.The transition plan includes also the study to evaluate the possibility to introduce a tramway in Genoa. Decided the preliminary specification of the project: the first stage of tramway will be realised in Val Bisagno Valley in project financing.