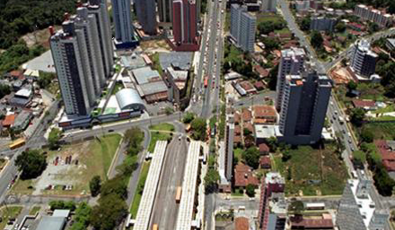 In Curitiba, a Bus Rapid Transit system has been created to make travel by public transport easy and attractive.

The city of Curitiba is situated in the south of Brazil, close to Sao Paolo. With approximately 1,760,500 inhabitants, it is the eighth most populous city in the country and the largest in Brazil's south region. Curitiba has a unique transportation system, developed locally and generating much interest worldwide. This Bus Rapid Transit (BRT) system is very simple and practical. Public transportation consists entirely of buses. There are several different types of bus, each with a different function. The bus system is designed to be the most comfortable and preferred transportation choice for the public.

As early as the 1960s Curitiba developed a comprehensive Transport Master Plan. In 1974 the first BRT line was opened along one of the transit corridors to increase public transport uptake. The BRT is the heart of this transit-oriented development. It features speed buses that connect transport centres over long distances and short distance buses that stop every 500m.

The impact can be best measured by the number of travellers commuting by public transit and by the average distance residents travel. In the 1970s, about 7% commuted by public transit. In 2006 almost 75% used public transit to commute to work. This is equal to 23,000 passengers per hour, which is more than New York, the United States’ most transit-oriented city (Garrick et al. 2006). Curitiba's public transportation integrated network maintains 2,100 buses (1,500 in its urban perimeter and another 600 in the integrated metropolitan ones). Of these 1,500, 1,280 operate on a daily basis and transport 2.040 million passengers each and every workday (1.55 million from within the Curitiba area, totalling 800,000 passengers that pay fares; and 490,000 from within the Metropolitan Area of which 230,000 pay fares). Buses travel every day along all the routes of Curitiba and surrounding areas, distributed among 385 different lines (285 of them urban and 100 in the metropolitan areas) and 5,000 bus stops.>In addition to these bus stops, there are 351 tube stations and 29 integrated terminals. The smart growth approach in Curitiba has undoubtedly led to an attractive environment. Curitiba was able to attract skilled workers and diverse industries.

A good indication of the quality of life achieved in Curibita is the higher GDP and a lower unemployment rate than the Brazilian average. Liveability indicators, such as the amount of green space per capita, also give a good indication of how attractive a city is. Currently Curitiba has 55m² of green space per resident - a much higher rate than the 16m² per resident recommended by the World Health Organization.

There is no doubt that Curitiba has benefited from its highly dynamic mayors who supported and pushed for innovative mobility solutions. The underlying success factor is that the main principle of the Master Plan was to give priority to cheaper and cleaner modes of transportation as well directing the growth of the city along five linear mixed land use transport corridors. The plan further included many programs to improve the environmental and social sustainability of the city (Garrick, 2006).

In addition, Curitiba dramatically improved its allocation of public space to pedestrians with major car-free areas in the city centre. The pedestrian zones also act as feeder services to the BRT system by easing pedestrian movements towards stations. However, it is not only the city centre that is built in a pedestrian friendly manner. Most major roads have large walkways providing a safe environment for pedestrians. Bicycles are well integrated into the bus system. Currently 150km of bikeways have been built. Bicycle parking allows cyclists to conveniently store their bikes on site.