“Transformation in Transportation” in Izmir (Turkey) 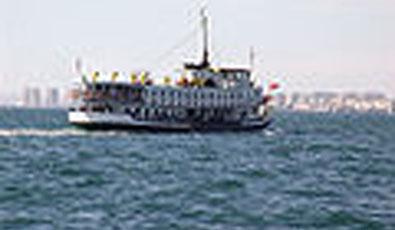 In 2000 the Izmir Greater Municipality launched its “Transformation in Transportation” scheme in a bid to overhaul the public transport system, which was being under-utilised in favour of private vehicles. Carried out in two phases so far, the project is aimed at creating an integrated public transport network in Izmir, in which rail and ferry transport is to be improved and better utilised to reduce traffic on the roads, and providing a more economic and passenger-friendly system.

The growth in car ownership in Izmir in recent decades has brought serious congestion problems, while the local ferries and bus services have been severely under utilised and have developed with profit in mind, rather than providing a high-quality service.
The municipality launched the “Transformation in Transportation” in a bid to attract the public back onto public transport, and particularly rail and sea transport, thus taking the pressure off the over-burdened road network.

Phase 1 of the “Transformation in Transportation” project was launched in 2000 with the development of a fare policy and collection scheme, as well as an integration of the bus and ferry routes and schedules, and followed the introduction of the “Kentkart” travel pass scheme in 1999. New bus feeder routes were established offering travel at low cost, and linking existing and new transfer centres and the ferries, thus promoting increased use of the ferries.

The existing ferry fleet of 11 vessels was expanded with the leasing of 10 sea buses, and two new ferry piers bring the total piers now in operation to eight. Of these, two have undergone rearrangement to allow services from the feeder buses, while park-and-ride facilities have been established at the main ferry terminals at the two ends of the bay.

Phase 2 of the project included further restructuring of the bus routes to include low-cost feeder routes linking key locations with the new Metro, which opened with a line of 10 stations in April 2000.

A future phase of the project will include extensive works to the local commuter rail system. This will include conversion to double track, new stations with park-and-ride facilities, integration into the Kentkart system and integration with the local bus schedules.

The entire system of buses, ferries and the Metro have now come under local municipality control. Recently, the local main line commuter rail system also shifted under the responsibility of the municipality from the central government, and a modern regional rail service is to be provided.

Patronage of the ferries and Metro increased, while bus travel has decreased initially due to extensive restructuring. However, bus patronage has been increasing again, which is a remarkable result that clearly shows the potential of a well integrated public transport system.

Further information: Please refer to the Master Thesis carried out by Ayca Oncu from which this summary has been compiled: http://etd.lib.metu.edu.tr/upload/12609058/index.pdf

Further information at Public transport in Izmir http://www.izmir.bel.tr/StandartPages.asp?menuID=1911&MenuName= (Turkish only)