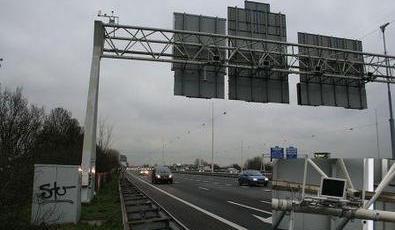 On Highway E17, the Flanders Government has installed a trajectory control system to register and fine speeding motorists. This is the first time this type of measure has been implemented in Belgium.

Up to now, fixed speed cameras have been used for unmanned controls. Motorists could avoid getting caught by simply braking briefly and then speeding up again. That type of situation does nothing to contribute to traffic safety. A trajectory control system is safer and is perceived as more honest. Moreover, it leads to more homogenous traffic flow and a more regulated image of upcoming traffic.

The Flemish Government decided to install a trajectory control system over a distance of 1889 metres on the E17 highway in Gentbrugge. On this particular stretch of road, about 60000 vehicles drive across the viaduct of Gentbrugge towards Kortrijk on working days (about 40000 at weekends).

Over the distance of 1889 metres there is a speed limit of 90 km/h. Two big ports control cars via cameras and ANPR (Automated Number Plate Recognition). The system works 24 hours a day. When the registered speed is too high, a picture is taken of the vehicle and the number plate is scanned. The info about the violation is then sent to the Federal Police. The system not only recognises Belgian number plates but also plates from neighbouring countries. The system can also scan stolen or wanted vehicles or motorists who make unlawful use of the hard shoulder.

The implementation process wasn’t easy. The system had to be approved by two governments: the Federal government because justice and the Highway Code come under federal jurisdiction and the Flemish government because it manages the highways infrastructure. In order to be pro-active, the Flemish Government implemented a test setup in 2008-2009. Implementation in real life conditions was delayed several times, due to legislative work that was lagging behind and technical issues concerning homologation and calibration.>For example, only in November 2010, the Royal Decree, allowing the police to register speeding motorists via trajectory control, was signed by the Federal Government. After that, homologation and calibration tests could finally start. Evidently, this took some time. Implementation was supervised by the Taskforce Enforcement belonging to the Flemish Government.

The system went into operation on 8 June 2012, and was a first for Belgium. The total cost (including infrastructure and software development) was 800000 euro.

Three out of four motorists show a positive attitude towards the initiative, according to a study with 2000 respondents carried out by the Belgian Motorists Club VAB. The respondents believe it can help decrease the number of road casualties. The increasing effectiveness of speed controls is considered to be very important according to the respondents.

Currently, a study carried out by the University of Hasselt is investigating the effectiveness and efficiency of the system. Results will be available in September 2013.
A second system is due to be installed on the E40 over a distance of 7 km between Wetteren and Erpe-Mere. Other upcoming installations are E40 Zwijnaarde-Aalter, R1 Antwerpen-Kennedytunnel, E40 Sterrebeek-Bertem, A12 viaduct Wilrijk at the Bevrijdingstunnel/De Vostunnel, E17 Deinze-Gentbrugge en de E313 R1 Wommelgem.

Note: The picture doesn't represent the actual situation on the E17 in Gentbrugge. However, it presents a similar image of trajectory control.