Training older people in Kraków how to use public transport (Poland) 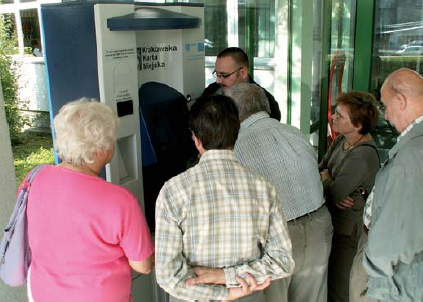 From September to November 2009 mobility workshops for older people took place in Kraków. They consisted of three training sessions, during which seniors could become acquainted with the rules of safety when using public transport, learn how to operate the inner-vehicle ticket machines and buy a ticket on their own, and to get to know the functioning of Kraków’s Municipal Card.

During the last couple of years, vending machines and on-board ticket machines have been introduced in Kraków. They are becoming more and more popular among citizens. The only group of people still not very familiar with new equipment is seniors. Many are afraid of new technology and it is difficult for them to overcome this fear and start using ticketing machines. Very often the issue is with using the system for the first time - people are not able to use certain machines because nobody has shown them how to use them.

Training sessions were organised between September and November 2009 for older citizens as part of the AENEAS Project. The municipality of Kraków's Urban Infrastructure Office (a partner of AENEAS project) was responsible for implementation of the training workshops. A number of other stakeholders were involved. The NGO Senior Na Czasie (SnC) was engaged by the Municipality of Kraków to manage the registration, organisation and evaluation of the workshops.

Before the commencement of the workshops, two meetings were organised by Urban Infrastructure Office & SnC, with the public transport (PT) operator Miejskie Przedsiębiorstwo Komunikacyjne S.A. (MPK) and Kraków’s Board of Transport, respectively. During these meetings the idea of running workshops was developed into an action plan. Before implementation SnC organised two focus group meetings with older people to check whether the scenario and plan of the training was really accepted by seniors.

The second important stakeholder was the PT operator MPK. Thanks to MPK it was possible to hold one part of a training session in a depot, with access to a fully operational low-floor tram for training purposes. Employees of MPK were present during all parts of the training sessions and helped participants to put theory into practice in order to buy the tickets on their own.

The AENEAS training focused entirely on public transport. During two hours of training, participants were taught how to use the on-board ticket machines installed in most of Kraków’s trams and buses, and how to use the municipal ticket-vending machines located near public transport stops. Part of the training was also dedicated to safety issues. Seniors had the opportunity to learn many interesting things about the technology used in Kraków’s new low-floor trams, such as voice and visual announcements, ticket punchers and door-closing mechanisms.

The workshops were announced in local media including the press, websites, various city media and in a local television programme called 'Time for Seniors’. The project was supported by the EU's Intelligent Energy Europe programme. Costs associated with preparing and organising the five workshops (staff costs, giveaways, refreshments) amounted to about 20,000 PLN (€ 4 680). This was claimed as eligible costs of the project. The room rental, use of the PT tram and efforts of MPK staff were all provided for free, thanks to the kindness of the MPK Board.

Results
Participating seniors were asked to complete a questionnaire in order to evaluate the training sessions. The most interesting results were:
The conclusion is therefore that seniors were satisfied with the training. They emphasised that it was important for them to have an opportunity to participate in workshops organised just for them, as there was no pressure from younger trainees; the trainers were very patient; issues were repeated several times; and they had an opportunity to learn on working equipment in real vehicle.
It has to be mentioned that older people had many difficulties in filling in the questionnaires. Very often they didn’t understand the questions or didn’t know how to answer properly. The individual help of trainers and people from the municipality was beneficial.
The activity is transferable but it has to be stated that every city has its own problems so the agenda of workshops should be elaborated individually. A focus group meeting with senior citizens could be very helpful to gain an understanding of what they recognise as the real problems they encounter in everyday life.
Topic:
Collective passenger transport
Transport for people with reduced mobility
Mobility management
Region:
Eastern Europe
Country:
Poland
City:
Kraków
Contact:
Tomasz Zwolinski
Author:
AENEAS