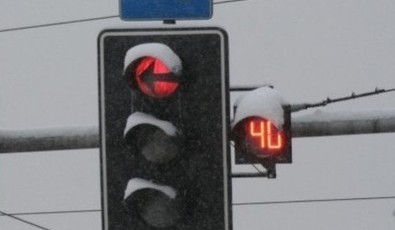 Wroclaw is already one of the largest towns in Poland and is rapidly growing. To improve its traffic flow, some 119 countdown traffic lights were installed. The process took 18 months.

There are two types of traffic lights in Wroclaw. One is standard, where the cycle length is constant, and the other is accommodative, where sensors allow the signals to adapt to the actual traffic situation. In both cases drivers are not informed of how much time is left before the signal changes. People are either delayed when the green light comes unexpectedly or “chase” the green signal in the “fear” that it may change to red at any time. Such situations are either dangerous or can limit the capacity of the existing road infrastructure. The newly introduced countdown meters have been installed to avoid these negative situations.

In the beginning, opinions about the meters were divided. To obtain an objective assessment of their functionality, two larger street intersections were selected for a test implementation in 2010. The pros were quickly noticed and the recorded effectiveness encouraged the city authorities to install the meters on seven other intersections. The cost of 19 meters and a 3-year service was about €16,000 (64,000 PLN). In 2011, even more meters were installed: 97 units on 19 intersections at different locations in the whole urban complex of Wroclaw.

The meters play an important and positive role in the traffic system of Wroclaw. It has been confirmed that the meters can also be used for accommodative systems. This is an important part of the implementation of a centralised traffic management system in the city.
The meters have been well accepted by all street users. The capacity of existing roads has been raised and fuel consumption, CO2 emissions, use of brakes (dusting) and dangerous situations have been reduced.