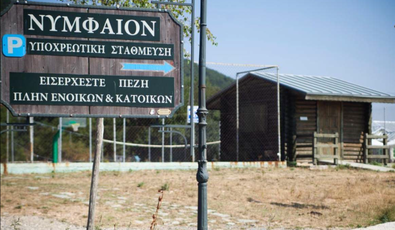 In order to preserve the natural environment and to promote non-motorised transport, the village of Nymfaion was made car-free in the early 1990s. The measure is still in force.

Most of the streets in this small village are cobbled and narrow, and it provides a natural environment for many animals. The measure of banning motorised transport was undertaken in order to protect the natural environment and the several monuments that exist. In general the measure aimed to preserve the traditional character of the region and to sustain the proclamation of the village as one of the ten most beautiful villages in Europe. In the early 1990’s restoration of buildings and the area surrounding the village took place. It was then decided by the authorities and local residents that, in order to protect the village, no cars should be allowed to enter.

At the entrance of the village there is a large parking facility where all visitors are obliged to leave their cars. Only local residents are allowed to enter by car in order to reach their homes. In the village, people move only on foot, by bicycle or on a horseback.

The parking facility at the entrance of the village already existed, so no construction was needed. The only thing implemented was installation of the relevant signs. No police office exists in the village, so the locals are responsible for the compliance with the measure.

Once put into force, the banning of motorised transport needs nothing else for its operation. The local residents respect it on a high level and also undertake the responsibility to inform and enforce visitors to respect it as well.>The only obstacle was the reluctance of the hotel owners who were afraid that visitors would not come to Nymfaion because of the ban. A concessions was made to allow residents of the hotels in the highest locations of the mountain to use their cars to travel up to the hotel and park there.

Apart from the installation of the sign at the entrance of the village, no other cost is related to the implementation or operation of the measure.

The measure is respected by most of the visitors and local residents. It has significantly contributed to the protection of the natural environment and of the traditional character of the village. It also helped increase the number of visitors, as the complete absence of motorised transport is one of the reasons tourists come to Nymfaion.

Taking into consideration the opinion of the owners of local businesses (restaurants, hotels, etc.) and protecting their interest is important. Once their doubts were discussed and solutions were found to their problems, the owners of these businesses became keen supporters of the measure. The support of the local residents to the measure is extremely important, as they are actually the ones responsible for its implementation and operation. Nymfaion could act as a good practice example for other similar regions that could implement the same measure.

This case study was collected within the STARTER project.