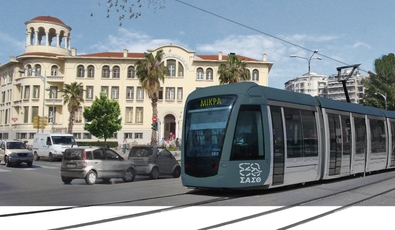 Despite being in a deep economic recession Thessaloniki prioritised the development of a Sustainable Urban Mobility Plan (SUMP). Through involving all key stakeholders, the Thessaloniki Public Transport Authority (ThePTA) has been able to implement a SUMP for the entire metropolitan area focused on public transport and using limited financial resources. The Thessaloniki SUMP is now an example for other cities in Greece and other countries in south eastern Europe that face similar challenges.
Context
ThePTA is a public body of the Metropolitan Area of Thessaloniki under the central government’s Ministry of Infrastructure, Transport and Networks. It operates within the Thessaloniki greater area, now called the Metropolitan Unit of Thessaloniki, which consists of 10 municipalities and over one million inhabitants.
In 2010 the economic and financial crisis led to the cancellation of all public spending, and the infrastructure plan proposed by the Ministry to replace the 10-year-old plan was not implemented. However, with issues like rising traffic congestion (Thessaloniki is the second largest city in Greece after the capital Athens), delays in the metro construction and the lack of co-ordinated mobility planning, action had to be taken. With funds from the South East Europe Transnational Cooperation Programme (SEE), initiated and co-funded by the European Commission’s European Regional Development Fund (ERDF), a SUMP was produced.
In action
To overcome the city’s mobility issues and to produce a SUMP in times of austerity, ThePTA benefited from its participation as a partner in the Attractive Urban Public Transport for Accessible Cities (ATTAC) project of the SEE programme. The project was 85 per cent co-financed by the European Commission’s ERDF and lasted from January 2011 to December 2013. It involved the urban areas of eight partners, with 11 partners in seven south-eastern EU member states (HU, IT, GR, SK, SL, RO, BG). The total budget was € 2.45m, of which ThePTA received € 260 000.
Less than half was allocated to composing a strategic SUMP, requiring ThePTA to produce its plan with a limited budget of roughly € 125 000. It used this sum to pay for consultants, experts, data collection, consultations with stakeholders and promotional materials. The mobilisation and commitment from a wide range of stakeholders (including central government ministries, regional authorities, municipalities, trade unions, passenger and cycling associations, transport institutes and the university) and an emphasis on the better use of public transport were key elements of the planning process.
Results
The final SUMP consists of 12 measures to be implemented and monitored, and enhancements to the SUMP methodology including integrated pricing and financing, travel behaviour research and specific attention to mobility planning for tourist destinations. In order of priority for ThePTA, they are:
Stakeholders have been very positive towards the plan’s vision, approach and measures, helped by the fact that most authorities are represented on ThePTA’s Board. Citizens have also been involved during the European Mobility Week in 2012 and 2013 and have shown enthusiasm for the plans. Each measure is expected to be implemented by 2022, around 10 years from the beginning of the SUMP creation process. The finance to complete the measures will come from the next round of European Commission Structural & Investment Funds for 2014-2020, and the Regional Operational Programme for Central Macedonia.
Challenges, opportunities and transferability
ThePTA created this SUMP with limited financial resources by using the SUMP guidelines and actively involving stakeholders - making Thessaloniki one of the first cities in Greece with a plan drafted according to these guidelines. Following the plan’s completion, ThePTA provided three recommendations that it believes will help other cities create their own SUMPs, as well as update Thessaloniki’s own SUMP in the future. The recommendations were to:
With regards to the integrated transport authority: ThePTA is currently preparing its transformation into a single transport and mobility authority along the lines of other European transport authorities – a move that ThePTA chairman Mr Ioannis Palestis says is ‘a priority’.
In Depth
Topic:
Urban mobility planning
Mobility management
Country:
Greece
City:
Thessaloniki
Contact:
David Brown
Author:
Rutger Beekman