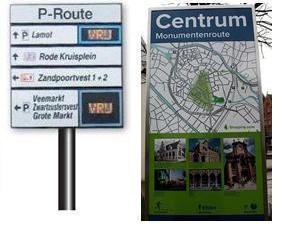 The existing car-free area in Mechelen was recently expanded. Signs lead drivers from the ringway to various parking lots. From these, walking paths marked with helpful information boards lead pedestrians to the car-free city centre.

Mechelen is a Flemish city with a population of 80,000. The city lies on the major urban and industrial axis of Brussels-Antwerp, about 25 km from each city. The city also hosts an important rail interchange that provides immediate access to railways and the bus network with urban and several regional lines.

In recent years the city has invested heavily in creating a liveable and accessible place for residents, traders and visitors. In late 2011, the city's car-free zone was expanded, changing the traffic circulation and introducing monitoring through cameras with number plate recognition. At the same time thematic walking trails were designed that lead people from the various parking lots and train stations into to the car-free city centre.

The inner city of Mechelen is a low-car traffic zone, car-free every day between 11am and 6pm. In practice this means that the area is always accessible for pedestrians and cyclists. Public transport, buses, taxis and permit holders are also allowed. Thus those without a permit have the choice between more expensive parking in the centre and cheaper car park at the edge of the city (free at weekends). The car parks are only 10-15 minutes' walking distance from the centre. Mechelen has 2 train stations: Mechelen Central and Mechelen-Nekkerspoel. Both stations are also 10-15 minutes' walking distance from the city centre.

With the expanded car-free zone in place, convenient waking routes to the centre were built with the city’s two train stations and the car parks as starting points. They help residents and visitors find the way to the city centre.>Through comprehensive information boards and convenient coloured stepping stones, pedestrians are guided into the city. Each board has a handy map and indicates the distance to the centre in minutes and metres.

Every route has a different theme that refers to interesting places, making the walk more pleasant. For example, the Yellow or Children's Route lasts on average 12 minutes and features special children's activities and a small playground to make the journey more fun. Hikers may opt for the Margaret or Blue Route which takes them past the palace of Margaret of Austria and Margaret of York. Other routes are the Green Route or Monument Route, the Pink Route or Art Route and the Orange Route or Travelers Route.

The thematic walking routes are promoted by Tourism Mechelen but complement the mobility developments of the city and are part of an integrated planning approach. The expanded car-free centre makes the city more attractive for residents, but the walking routes are especially designed for customers and tourists. As such the city tries to find a healthy balance between accessibility and liveability.

Though the inner city has become more care free, the city is still reachable by car. In fact, all car parks in Mechelen remain permanently accessible. The underground parking in the downtown are is still available for everyone through the city loops. The dynamic parking guidance system is adapted to the new traffic circulation so that cars from the ringway are efficiently guided to the nearest car park in the centre and edge. The different neighbourhoods, however, are spared cut-through traffic and yet remain accessible to local traffic.

The thematic walking routes are both functional guides to get quickly to the inner city, and recreational introductory guides which take people to particular points of interest the city has to offer.