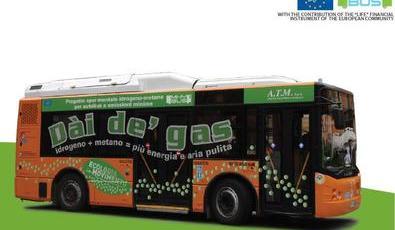 To improve the environmental performance of CNG buses, the transport provider of Ravenna ATM (Azienda Trasporti e Mobilità) has tested hydrogen blended natural gas (HCNG) on two of its buses. HCNG is expected to lower emissions and reduce fuel consumption of CNG busses.

Since the 1980s ATM in Ravenna has been using CNG buses. In 2006 the company started an experimental program to introduce HCNG into their fleet. For many years natural gas has been considered the most promising alternative fuel from an environmental point of view. The low emission rate of particulate matter (PM) and gaseous pollutants make it ideal for urban public transport. Hydrogen also shares these advantages and seems to be even more environmental friendly, but hydrogen as a fuel needs special engines and their reliability and longevity is still not satisfactory.

Compared to the emissions of other pollutants, the NOx emissions of CNG engines in stoichiometric conditions are relatively high. To reduce these emissions, a catalytic converter or a special lean-burn engine is needed. These lean-burn engines move the gas-fuel ratio to excess air, which causes a slower combustion. The slow combustion can misfire, which causes a decrease in engine efficiency and an increase in hydrocarbon (HC). The use of hydrogen as an additive to CNG can avoid misfire and leads to a better combustion performance. Hydrogen also burns up to 10 times faster than CNG, which leads to a more rapid combustion, meaning that the content of fuel can be reduced and fuel consumption is minimised.

Two buses (8m and 12m in length) were chosen for the experiment. Both were built by Bredamenarini and equipped with turbocharged Mercedes-Benz M906 LAG engines, adhering to the EEV standard. The testing facility was a 3.8km-long circuit within the Casaccia ENEA Research Centre. The altitude of the test circuit was between 132m and 152m above sea level, and the track was flat with a few slopes. The circuit also included right-angle intersections and bus stops every 250m to create a realistic driving cycle.

It was found that fuel consumption could be reduced by up to 16 per cent when using a 20 per cent hydrogen mixture. The higher the hydrogen percentage, the lower the fuel consumption. The same correlation could be found with CO2 emissions, with a reduction of 192.46 g/km (23.1 per cent) when using a 25 per cent HCNG mixture in the 8m bus. NOx emission-reduction with HCNG is ambivalent. The test showed that without improvements in ignition, NOx reduction with 5 per cent HCNG is nearly zero. Moving the adjustment of ignition one degree in delay, the emission of NOx could be reduced by 46 per cent. At higher levels of HCNG mixture (20 and 25 per cent) the emissions of NOx increase due to a hydrogen-induced higher ignition temperature.

In line with the completed trial and in order to contribute to a sustainable mobility, ATM is working together with ENEA and ASTER on a project called MHY Bus, financed by the EC under the LIFE+ program and co-ordinated by the Emilia-Romagna region. A HCNG prototype bus was built and tested, with an engine optimised for a 15 per cent HCNG mixture. Successful field tests took place between 2009 and 2010. On-street tests started in 2011 and finished in 2012.