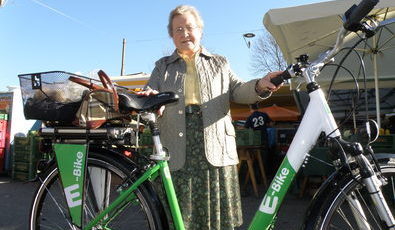 In the context of the EU project Active Access a pedelec test was carried out in Graz, Austria in August 2010. 20 locals aged between 45 and 70 years had the opportunity to experience the benefits of a pedelec in their daily life for a whole week. The test activity aimed to find out how middle-aged & senior people use a pedelec for their trips (especially shopping and leisure time trips) and what kind of advantages and disadvantages arose.

The EU project Active Access within the scope of the STEER programme and supported by the City of Graz, Department of Traffic Planning, aims to shift motorised traffic to walking and cycling in an outer borough of the City of Graz for daily trips. The pedelec (pedal electric cycle) test aimed to analyse pedelec use by middle-aged and senior people on shopping and recreation trips. Whilst bicycle use for recreation is widely accepted by the target group, shopping by bike is often seen as inappropriate. Latest studies carried out by the bicycle lobby organisation ARGUS in Graz, prove that more than 70 % of all shopping could be transported within a bike basket. The pedelec test aimed to reduce scepticism about e-mobility and to encourage people to be more active even in senior age. It’s an important goal to keep people fit, active and independent as long as possible. The proportion of male bikers in senior age is very small. Probably the technical aspects of pedelecs could add to awaken their interests in cycling. Walking, cycling and also cycling with pedelecs could contribute to increase people’s quality of life as individual well being is increased by “active mobility”.

Since it was a pilot project the selection of appropriate testers was crucial for the success of the action. The target group were middle aged and senior citizens of both genders. A focus was made on people that rarely use bicycles for their daily trips since it was a goal to shift car drivers to active modes of transport. In this context the re-entry of people to physical activity - people who usually aren’t physical active at all - was a side-goal. At a start-up meeting participants were briefed about the goals and aims of the pedelec testing action and instructed about the use of pedelecs. Pedelecs were made available to each participant in the borough of Andritz (at the hilly outskirts of the City of Graz) for one week. A co-operation with the local energy provider Energie Steiermark enabled the organisers to provide these test-pedelecs for free. During the test-week participants were had support(mobile phone hotline, regular meetings) to address potential problems regarding the handling, the technical aspects and maintenance of the pedelecs and the motivation of the individuals.>Participants had to regularly complete mobility diaries to monitor the action and to evaluate the results after the finalisation of the test phase. After 4 weeks of testing there was another meeting where results were discussed and participants were interviewed altogether about their experiences. Finally results were published in the media.

During one month of testing 20 participants cycled about 1500 km with the pedelecs (each person had the bike for one week). About half of the 1500 km were shifted from car to bike on journeys that would otherwise have been driven by car. The radius of action was increased from an average of 1,4 km to 3,3 km. On an average 1 tester cycled 73 km in more than 3 hours (23 km/h average speed). On average 1 tester covered 12 trips a week by pedelec. In general, citizens of Graz carry out an average of 3,7 trips a day (Sammer / Röschel, 2008). That means that the testers did 46% of their trips by pedelec. Half of the trips which were done by pedelec instead of a car were shorter than 6 km, a distance which is ideally suited to pedelecs.
The test phase has therefore shown that the use of pedelecs could encourage a model shift from cars to sustainable mobility.
At the beginning many participants were sceptical about Pedelecs. After the pedelec-test participants consistently changed their opinion. Most of the doubts and scepticisms were gone. Participants with their pedelecs were well received by their family and friends. In general pedelecs have a good image. Nevertheless, people in the target group often argued that they were fit enough for a conventional bicycle without needing additional power. Participants who are still in working age tend to use their pedelecs in order to reach their workplace. It’s easier to inspire working age people than senior people to use a pedelec (although senior people might be less fit than working age people because of a lack of exercise and sports). Pedelecs are advisable for people with limited mobility who take much pleasure in activity and independence. Pedelecs encourage people to go to leisure bike trips in groups with other cyclists because they don’t run the risk of slowing down the rest of the group because of poorer physical condition. People can enjoy the pleasures of cycling because they can use the additional power from the electric drive system as needed. Contrary to some fears pedelecs do not attract users of conventional bikes to become users of pedelecs.