Test traveller activity in the city of Umeå. Sweden 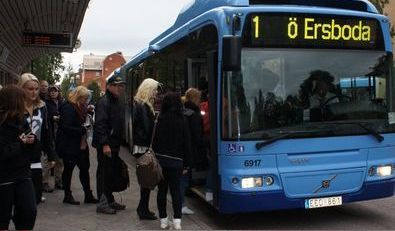 The city of Umeå has been applying the concept of “Test Travellers” since 2009. It is one of the activities the city carries out to encourage people to test and try more sustainable modes of transport.

Umeå is an urban area where bus services are good and offer a real alternative to the car, as half of the trips made by car are shorter than 5 km. According to estimations made by the City Planning Office, it takes about the same time to travel short distances by bus and by car. For some routes buses are even faster. Consequently most car trips could be replaced by bus trips without having a significant time difference.

The City of Umeå has implemented an activity called “Test traveller” 13 times since 2009. The purpose of the activity is to encourage active car drivers to use bus transportation more frequently to commute to work. The action has been implemented and financed in cooperation with the Green Citizens of Europe project / Be Green Umeå, the municipality of Umeå and local bus companies.

The test traveller activity normally starts with an active recruitment campaign in order to find interested and motivated participants. The test travellers are recruited by open calls, direct letters to residents, street campaigning and visits to workplaces. Each time the aim is to find participants from a certain neighbourhood of the city.

The activity is mainly targeted at active car drivers. After the selection has been made, the test travellers receive a free pass for the city buses for a one month period.>In exchange they promise to leave their car home at least 3 days a week and share their experiences about the new way of travelling with others. Usually around 50-100 participants have been selected, but in one inititative 258 commuters took part.

Each test period ends with a meeting where the test travellers are invited to hear the results of the survey, share their experiences and give feedback about the bus services. According to the surveys, most of the participants (around 80%) have been satisfied or very satisfied with the experience. Around 60-80 per cent of the respondents have also expressed their desire to continue using buses more frequently than before. For many the experience was eye-opening and challenged their previous prejudices towards public transport. However, some were less satisfied with the increased time spent travelling and the congestion on the buses.