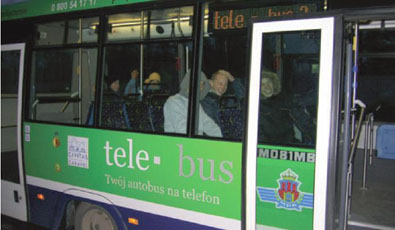 The main objective of demand-responsive transport (DRT) in Krakow was to better serve passengers by giving them more personalised service that could be adjusted to their actual needs without generating significant costs for the service launch and daily operation.

The DRT service in Krakow, called Tele-Bus, was launched in July 2007 after the transfer of technology and know-how from Genoa to Krakow. The preparation of the service operating design, adaptation of the software for managing flexible service, and staff training were all conducted in collaboration
of Polish and Italian CARAVEL project partners. Significant problems that occurred during implementation of the Tele-bus were related to organisational issues as well as social acceptance of this innovative solution. The first issue was to agree on a share of responsibilities for DRT service between two public transport actors: MPK, the operator, and PT&RA. Another difficulty was to persuade potential clients that the flexible public transport service has
many advantages and is a good solution. The main objective of the campaign was to let potential clients know and understand the rules of the flexible service.

Tele-Bus is “many to many” public transport service with fixed stop points and flexible routes and timetables. It operates every day in the southeastern part of the city and during defined operating hours. The service is carried out by the local public transport operator Miejskie Przedsierbiorstwo Komunikacyjne SA on the basis of a service contract with the Public Road and Transport Authority (PT&RA).>The operator is paid on the basis of vehicle-kilometres delivered. Daily operating costs include: personnel (dispatchers and Tele-bus drivers) and vehicle maintenance. The service covers three districts: Rybitwy, Podwierzbie and a part of Biezanów. This area consists of residential and industrial zones of low population density. Conventional service here is not efficient and runs infrequently. A main goal of the DRT service is to make it easer for inhabitants to reach communication junctions where changes to other
lines are possible.

Since mid-July 2007, the Tele-bus service has been developing and the number of transported passengers has been gradually increasing (starting with about 300 passengers in July and August 2007 and exceeding 2,000 in January 2008). The pilot phase will allow all the involved actors to evaluate the impact and the functionality of the flexible service with a view to future development of DRT in the city of Krakow. The implementation of the DRT service must be preceded by a profound study of the specific character of flexible transport and existing examples in order to better use its benefits in a certain public transport system and reach a target which really needs and will appreciate such customised service.