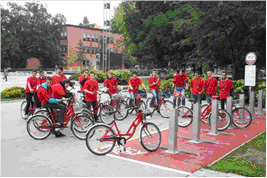 Velenje has implemented its new modular bike sharing system - System BICY. Residents are able to pick up one of 25 bicycles from 40 terminals at 5 city stations. System BICY was launched on the 18th of September 2012 and covers an area of approx. 3 square kilometres in a network where the terminals are no more than 600 metres apart. The system encourages Velenje's 34,000 inhabitants to use a bicycle instead of a car for short trips.

In Slovenia, no bike sharing systems existed until the end of 2011 when the first modular bike sharing system was implemented in the capital city of Ljubljana.  In Velenje, a smaller city, all existing studies (e.g. from Italy, Austria, Barcelona, Paris, Chicago etc.) along with knowledge from existing schemes were put to use and combined in the implementation of the new bike scheme.

The central concept of many of the Bike Sharing / Public Bike systems is free or affordable access to bicycles in order to reduce the use of automobiles for short trips inside the city, helping to reduce traffic congestion, noise and air pollution. Velenje decided to use a system that will provide innovative technology solutions for rental services and a detailed system for tracking and control.

The investment in Velenje consists of the implementation of a small scale bike rental scheme (5 rental stations, 25 bikes) based on a modular design of station that allows future adaptation and easy maintenance. It is also flexible enough to be moved should any changes occur within the network. Each station is connected to a central control station and each rental point is equipped with a RFID reader and a numeric keyboard. Local inhabitants are the target group of this new service.

The main aim of the implementation of the BICY System was the general promotion of cycling and to increase the number of trips made by bicycle, thus increasing the share of cyclists in the city.  The Municipality of Velenje (MOV) also hoped to achieve the following:

An initial implementation plan was prepared (in June 2011) that served as a basis for the Implementation Concept that was further developed by external experts in September 2011. This concept was the basis to determine the MICROLOCATIONS for the placement of the bike sharing facilities. The entire scheme was developed in cooperation with the Velenje school centre and the entrepreneur training centre. After the locations had been determined, active preparation for the selection and tender of the contractor had to be carried out (from Sept. 2011- January 2012). The tender was then launched in January 2012 with the contract being signed in May 2012. After that, the installation of the system began in July and was finished in September 2012.

The system was implemented within the EU funded project BICY.

According to initial evaluation results, the bike sharing system in Velenje demonstrates that bicycle rental schemes can be successfully implemented in small towns. It has been readily accepted by the inhabitants and is a benefit for the municipality on many levels. The system will be upgraded accordingly to findings and requirements in the future. The mechanism allows the user to leave the bike at a different point from where it was first taken; therefore the system serves as a useful tool for different urban opportunities.

The Municipality of Velenje is already preparing projects to be submitted on other suitable programmes and funding schemes for the upgrading of the system in the future. In order to further ensure the maintenance of the system after the BICY project ends, the Municipality has anticipated funds in the municipal budget. MOV is also planning to connect the system with other existing and planned municipal schemes (such as Reuse centre, bike markets and so on).