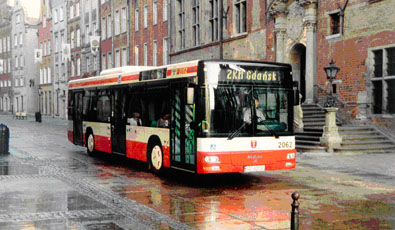 The objective of the present project is to raise basic awareness of the traffic problem and the role the citizens play themselves by using a survey as instrument for awareness raising. Additional to that the interviewer had the possibility to get in contact with the citizens and provide some information.

The city of Gdansk is one of the biggest and fastest developing cities in Poland. It is an area, where the rapid increase in the number of cars within the last 10 years is becoming more and more tangible. Most cities in Poland cannot deal with these arising problems, even though their citizens expect it and complain about the incompetent municipal authorities or bad public transport system. Campaigns promoting public transportation are organised sporadically. Therefore, it is high time to start some actions which would help solve these problems, not only from the infrastructural point of view, but also with regard to the attitudes and behaviour of the population, which affect the municipal transport system considerably.

Surveys as Awareness Tools:
The objective is to raise basic awareness of the traffic problem and the role the citizens play themselves by using a survey as instrument for awareness raising. Additional to that the interviewer had the possibility to get in contact with the citizens and provide some information. The selection of interviewees/campaign addressees focuses on families, as families with school-age children are an important target group - they see their car or cars as a medium inevitable for their mobility - and this behaviour also influences the attitude of their children.
The first step of the campaign after making contacts in a city council and setting up the frames for the activities was a cooperation with a local school.
The second step of the project was conducting a survey.>The interviewers and the questionnaire were focused on transport-related behaviour, motives and questions concerning the general traffic situation. The housing estate selected for the research project is relatively new: Orunia Górna, in which transportation infrastructure has not been completely formed yet. This housing estate is inhabited by a large number of families with school-age children; it is an important group, as they regard a car as an unavoidable means of transportation and their behaviour influences the attitudes of their children
The City Council found the survey results very interesting, so they decided to enlarge and continue the campaign as a third step.
Fourth step: The results of the survey were presented both to citizens and local government.

The conducted questionnaire research project showed that in general the public transportation in Gdansk is evaluated rather positively by the residents of Orunia Górna as well as Che?m. However, it is less popular among young people who have children and own a car. This indicates that in future, when the local community grows wealthier, use of public transport will probably become less frequent. This situation is certainly going to occur if use of private means of transport turns out to be more advantageous than travelling by bus or tram.
Talks with the representatives of agencies responsible for the city’s public transportation also indicate that at present the transport-related problem in Gdansk is not connected with lack of customers, but with insufficient funds of the transportation establishment. The shortage of financial means does not allow the city to expand, modernise, or even renovate the rolling stock adequately, and thereby increase the frequency of connections, the number of routes, and improve the comfort of ride.