The Streets Belong to Us - Istanbul (Turkey) 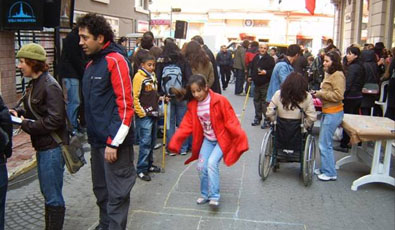 In four separate events, a selected residential street In Istanbul was closed to motorised traffic on a Sunday for 4 to 5 hours to demonstrate benefits of carfree living and carfree environments, and to show the residents how they can benefit from their streets as a safe open urban space.

On the sidelines of the Towards Carfree Cities Conference, held in Istanbul in August 2007, were a wide range of activities to be implemented throughout the year that aimed at raising awareness of the negative consequences of the car-oriented growth of cities, and to highlight opportunities for creating carfree living in car-dominated urban neighbourhoods.

One of the most important events was an awareness-raising campaign entitled “The Streets Belong to Us”.

The Streets Belong to Us campaign was carried out from February to July 2007, in four separate events. At each event a selected residential street was closed to motorised traffic on a Sunday for 4 to 5 hours. Each event had a separate theme that was brought into discussion in conjunction with traffic and transport issues:

During each event, a free-speech corner was provided, where people could speak to the crowd on the theme of the event, as well as on the effects of traffic, congestion and car-dependency.

The events were carried out in a street festival style, providing residents with an opportunity to allow their children to play in safe traffic-free open areas that would usually be danger zones. The events aimed to show the residents how they can benefit from their streets as a safe open urban space. Street furniture and various art installations were displayed to illustrate alternative uses for the street space that is lost to moving or parked cars.

The events proved to be very popular, creating a safe open area for a day in which children could play and the local community could gather. Prior to these events, Turkey’s efforts towards awareness raising in transport had been limited to traffic safety issues; and this campaign was the first to bring sustainable transport issues to the table.

Special thanks to Assistant Professor Dr. Kevser Üstünda? for providing information and photographs for this case study, which she gathered in her role as the organiser of the campaign.