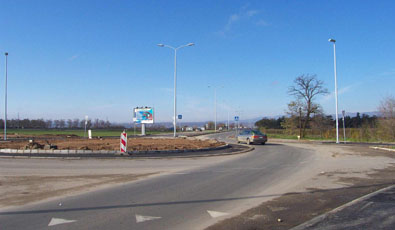 This case study has been developed within the EU-financed project TRANSPOWER (www.transpower-rp6.org). This case study provides an example of 'bad practice' to assist other practitoners making similar mistakes when implementing similar schemes. Dimitrija Tucovica Street is a very important entering-exit direction with a high traffic load. Because of existing traffic safety problems at the crossings with Dimitrija Tucovica Street it was necessary to reconstruct the crossings.

Dimitrija Tucovica Street is a very important entering-exit direction, used by the traffic that comes from the south and east of the city. It is also a connecting road between the city centre and numerous sub-urban settlements with thousands of inhabitants located in the east. This street is also used by public transport and numerous freight vehicles that deliver goods to a big cash and carry hyper-market. Furthermore there are numerous gas stations located at Dimitrija Tucovica Street whcih attracts city centre motorists.

The project design anticipates four roundabouts, two lanes in both directions and one service lane on each side of the street. Since legal and property relations have not been solved yet, the works on this were only partially completed (about half of what had been planned) - note that the average time for the solution of legal and property relations is between two and five years in Serbia.>

According to the project design, roundabouts are designed so as to satisfy all the requirements, but in-situ, the situation is completely different:First of all, one of the main advantages of roundabouts is that they can cope with high traffic loads coming from different directions. In this case the main traffic volume is only along Dimitrija Tucoviva Street so that roundabouts are not the optimal solution for this situation.Secondly, the radius of some roundabouts is so much decreased that it does not satisfy given regulations. There are no positive effects on traffic safety because motorists do not see the need to decelerate while approaching the roundabouts. Up to now several accidents have occurred.Furthermore there is hardly any separation of the different traffic streams in the roundabouts - this leads to the fact that even though the circular lanes are very broad they are only used as single lanes.Lastly, up to now there are no service lanes constructed although they would be of great help in gathering traffic flows from side entries to Dimitrija Tucovica Street in order to facilitate the delivery of goods.