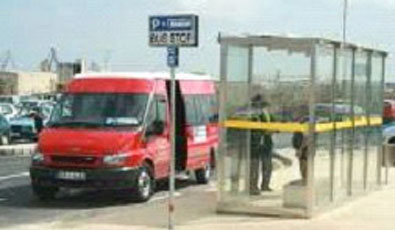 The Government commissioned a team of experts to look at the various measures necessary to improve accessibility to Valletta and Floriana. A number of projects have been implemented such as and Ride, a pay-as-you-go system of charging for access, the extension of the pedestrian area etc.

Malta is an island state with a population of just over 400,000 people. It also has one of the highest car ownership rates in Europe. Car dependence has been a result of (i) increased economic development and availability of household disposable income (ii) relatively low integration between land use and transport planning, leading to complex travel demands (iii) high status associated with driving a car and low status associated with riding a bus (iv) over provision for road infrastructure with relatively low investment in public transport.
Valletta, the capital city and its suburb Floriana lie on a peninsula in the Grand Harbour and were built by the Knights as walled cities. Within them there are the primary shopping and employment activities in Malta, attracting in the region of 35,000 vehicles in a day. This has led to congestion and pollution and therefore declining living conditions for residents and visitors alike. In the mid-90s, the Government introduced a fixed annual charge (V-licence) in order to deter vehicles from entering Valletta, however with increasing wealth, more and more cars chose to pay the annual charge and access the historic, narrow streets of the City. In the end, the V-licence ended up being another money generating mechanism for Government, whilst restricting access to the City to those able to pay the V-licence. Commuters ended up paying a very small price (€46) to enter and park in the City for a whole day, whilst occasional visitors were deterred because they either did not have the V-licence or did not manage to find parking close to the City’s shopping centre.

In 2004, the Government commissioned a team of experts to look at the various measures necessary to improve accessibility to Valletta and Floriana. The objectives of the White Paper were to look holistically at improving accessibility, reducing congestion and reviving Valletta’s declining commercial centre.

In July 2006 Government published its decisions to implement these projects. Progress so far is as follows.

In November 2006, the Park and Ride in Floriana started operating. Within the first three days of operation, the parking spaces were fully utilised by both commuters and new visitors to the City.

In May 2007, the Controlled Vehicular Access System went live. The system works with cameras utilizing Automatic Number Plate Recognition (ANPR) at entry/exit points and charging vehicles according to their stay within the zone boundary. CVA Technology Ltd was awarded the tender to operate this system. The main objectives were to reduce commuter traffic, long stay parking and cruising, whilst enabling turnover of parking for shoppers and visitors and decreasing cruising for parking. At the same time, the pedestrian area was extended to include the second shopping street in Valletta. This reduced the traffic zone considerably and improved the overall environment for the shoppers.
Electric minicabs were launched in July of 2007, whilst a tender for the operation of sea ferries is still undergoing award. In December 2006, the tender for the Vertical Connections projects, linking the ditches to the city centre was published. The contract for these works however has not yet been signed.

Current monitoring of the projects is underway to establish the impact of the strategy and the measures implemented thereafter.