Stabilisation of behaviour for collective transport in Znojmo. Czech Republic 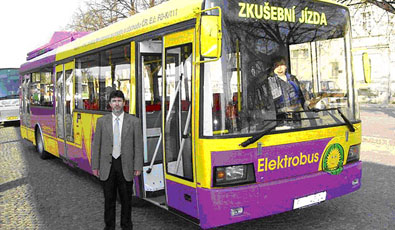 Strengthening collective transport - especially carpooling was the aim of the following campaign.

The main subject of the project Step by Step for Znojmo was and still is in the first place reducing energy in transport, air protection and improving of life environment for townspeople and its visitors in an every single season. Moreover, to ensure a comfortable transport to the work as well as clear movement of people in an urban area. The town was supposed to refer to impending danger of motorisation, especially to menace of exhausting gas and its negative effect on people and historical construction. A car is for all of us a kind of need so at the present, it is very unpleasant to be without it. In Znojmo arose a centre of Carpooling, a complex campaign is proceeding recently all the accessible media (TV, radio, press, information catalogues, direct mailing).

The complex advertising campaign hit about 60 000 citizens from 120 villages in the county where the project was presented at chief magistrate´s meetings every 3 months. They supported „Days without cars“, which was holding on 15th of June 2004 and European „Day without cars“ on 22nd of October 2004.Futhermore were supported actions, as follows: