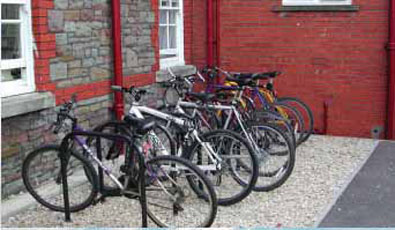 Promotion of sustainable modes of travel to Southmead Hospital such as walking, cycling and public transport.

The objective of this measure was to promote sustainable modes of travel to Southmead Hospital such as walking, cycling and public transport.

At the outset of the project, Bristol City Council undertook a detailed accessibility audit of 17 locations. Of these locations on the basis of scope for improvement and the emerging access to healthcare agenda, Southmead Hospital was selected as a pilot site for interchange andaccess improvements.It was identified that existing linkages between public transport and the site, and in particular travel options for getting around the site, could be improved. The North Bristol NHS Trust was keen to develop new access initiatives and there was the opportunity to link in with the planned Showcase bus route improvements, as the site is served by the 76/77 bus service.

Pedestrian accessThe Hospital site is bordered by roads with heavy traffic flows which made it difficult for pedestrians to access the site safely. To improve this, the Council implemented a new pedestrian crossing near to the Hospital entrance. A bus stop was relocated to be nearer to the crossing to make itmore convenient for bus users.Improved information provisionA Southmead Access Map was produced as part of this project.>Itfeatures a map of the Southmead area that highlights walking, cycling and bus routes to the Hospital. It also includes a detailed site map of the Hospital and general information about travel to hospital appointments. The map has been distributed to staff of and visitors to the Hospital as well as key locations such as local doctors’ surgeries.

Information provision at bus stops has also been improved. As part of the upgrade of the 76/77 bus route to Showcase standard, electronic Real-Time information has been installed at those stops closest to the Hospital. Inaddition, the information provided on the Access Map is displayed in poster format in the timetable cases at those stops.Display screens are also being introduced at key locations within the hospital providing bus service and other transport information to staff and visitors.On-site facilitiesTwo dedicated Car Club parking bays have been introduced on-site. Staff can use the vehicles as pool cars when they are not being used by other Car Club members.On and off-site infrastructure improvements have also been made, including improved walking and cycling signage and access improvements, new cycle stands and upgraded shelters for the inter-site bus service.
Topic:
Mobility management
Archive
Country:
United Kingdom
City:
Bristol
Contact:
Pete Davis
Author:
Pete Davis
Keywords: