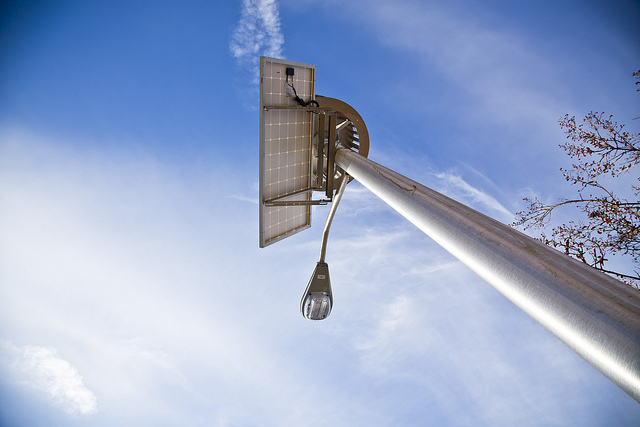 The town of Halinów, located on an important European transport route, has installed a road sign warning of a pedestrian crossing which is powered by solar energy. This project has helped further develop the use of photovoltaics in many places in Poland.

Context
The municipality of Halinów is located about 10 kilometres east of the border of the city of Warsaw and occupies a strategic position in the very important trans-European transport corridor East-West (Berlin - Poznań - Warsaw - Terespol – Moscow). The municipality and surrounding area enjoys intensive economic activity.
In 1999 a photovoltaic power system was installed supplying a road warning sign for the pedestrian crossing on national road 2. The aim of the project was to demonstrate the validity and effectiveness of the use of photovoltaics to power stand-alone devices in countries of moderate sun exposure, such as Poland. The project is still running today.
In action
The signaling device consists of a cartridge with a painted symbol, illuminated from inside, two pulsating warning lights and another one illuminating the pedestrian crossing. The solar generator consists of four 55W Siemens SM PV-modules installed over a total area of 1.68m2. The modules are placed on a special stage, attached to a pole, supporting the sign cartridge about 7m above the ground. Energy storage is provided by three 12V gel batteries with a capacity of 130 Ah each. These are sealed, maintenance-free lead-acid batteries with the electrolyte in the form of gel.
In addition, the system is equipped with a system to monitor meteorological parameters. Another set of sensors has been installed to observe and record all important operating parameters in order to control the correct operation of the sign and confirm the results of computer simulations. The lights have the power of 10W during the day and about 21W at night. The conventional light sources initially applied caused the whole system to use about 350W at night. During the day, the warning lights consumed about 100W of power while blinking. This significant power consumption has been reduced thanks to the use of compact fluorescent and electroluminescent hyperbright diodes. When the battery is fully charged, the system can continue to operate for up to 10 cloudy days in a row.

The project was funded by the General Directorate of Public Roads of Poland, Department of Central Warsaw. It has been implemented by the Warsaw University of Technology. The cost of the project amounted to approximately € 10 000.
Results
The photovoltaic power system installed at the pedestrian crossing in Halinów was monitored from January 2000 for a period of four years. Thanks to the self-control system the device was equipped with, it became easy to compare the results of computer simulation and the practice, in order to avoid shortcomings in the design and the construction of the next photovoltaic systems, applied throughout the country. This led to lower installation costs and to optimisation of size and capacity of the battery modules.
The photovoltaic systems are an economical and ecological power-source solution for every small electrical installation in both places away from the power grid, as well as in cities, where connecting to the grid might be expensive. Active road signs powered by solar energy offer excellent visibility from long distances, even in bad weather conditions, and allow the marking of any high-risk place on the road.

The success of this project was the demonstration of the usefulness and cost-effectiveness of traffic signs supplied by photovoltaic systems in the Polish climate. It was soon followed by a rapid development of this market sector. Currently, hundreds of such applications can be seen on Polish roads.
Photo by thisisbossi / CC BY-NC-SA 2.0
Topic:
Walking and cycling
Traffic and demand management
Region:
Eastern Europe
Country:
Poland
City:
Halinów
Author:
Witold Horoch