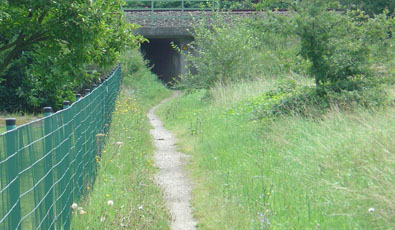 The Flemish town of Rotselaar promotes the use of routes for sustainable transport (RST) for recreational and daily transport. Therefore, the town council approved the reconstruction and repair of neglected ‘slow ways’.

Tucked away in the densest motorway network of Europe, lots of so-called ‘slow ways’ are to be found. These routes for sustainable transport (RST) are often former easements or rights of way.Unfortunately, these routes are regularly neglected or appropriated. Nevertheless, these routes are free of cars and therefore very safe and attractive for pedestrians, hikers, cyclists, recreational users, commuters, … Slow ways provide a means for healthy and safe mode of transport. In the present day, more and more people are convinced this to be true.

Rotselaar also acknowledged the advantages of such a mode of transport and decided to take action on the matter. The following goals were set:

A test case was chosen to take place in the area of Wezemaal, a part of the greater Rotselaar. This was done in collaboration with vzw Trage Wegen (non-profit organisation that promotes RST) and vzw Regionaal Landschap Noord-Hageland (non-profit organisation that promotes sustainable land use and recreation in the region).The routes, as defined above, were described, mapped and evaluated. The stakeholders such as villagers, usergroups and committees were asked to give their remarks on the usefulness, relevance and importance of the mapped routes. Afterwards they were also asked to give their ideas for improvement. These remarks and ideas were put together in a report.>

The town council of Rotselaar was very pleased with the outcome of the process and approved of a series of measures to be taken on behalf of the routes for sustainable transport. The following results were realized:

In addition to this, the town council together with the participants of the research group were convinced that sensibilisation and promotion must be a key-activity in the plans for RST. More people should know about the ‘slow ways’ and be aware of the many advantages that sustainable transport can bring to their environment.Therefore, a promotion campaign will be set up for using the RST: a Sunday walk, an errand in the village center, commuting to work or to the railway station… This includes raising awareness that walking and cycling is good for health as well for ecological reasons but also that these ‘slow ways’ can very often be the safest and actually fastest ways by means of short cuts and good networking.