A slightly different race in the city of Bolzano/Bozen (Italy) 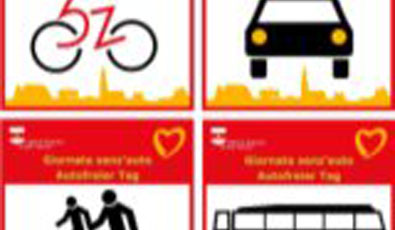 Sustainable mobility is also a cultural matter. Among different campaigns in the city people should be motivated to use alternative forms of transport. In this sense, the objective of the race was to get people to change their behaviour in favour of taking the bike, the bus and walking. With the help of the local media (newspapers, radio, magazines, TV) the different actions should remind as many people as possible that there are alternatives to the car. Furthermore, non-motorized forms of mobility support the wellbeing and keep in form. Especially for short distances within the city the bike is the most advantageous vehicle. The bike modal split in Bolzano/Bozen rose from 17.5% in the year 2001/2002 to 22.7% in 2005. The objective is to achieve 25% until 2007/2008.

On the Car Free Day, the city administration organised a lot of activities to promote alternative forms of traffic. For example all cyclists along the main bike lanes got a free breakfast, mobile garages repaired bikes free of charge and new signposting indicated the distances to important places in the city in minutes instead of kilometres. But the main activity was a slightly different race through the city centre where different means of transport participated. Object of this race was to demonstrate in a funny way which means of transport are the fastest, the cheapest and the healthiest. The>race between different means of transport held through the city centre of Bolzano/Bozen should demonstrate which vehicle is the fastest, the cheapest and the healthiest for the everyday movements. First of all it is a marketing strategy in order to promote intermodality and bike use for everyday life. In this slightly different race the bike, the car, the bus and a pedestrian where involved. To promote a sustainable form of individual motor car traffic, the car sharing bolzano vehicle was used. The route was chosen in the way that two well known points in the www.eu-vianova.net city, representing key places for the everyday life, got connected. The arrival and the awards show took place in the heart of the historic city centre. A small festival with catering, information material, bike exhibition, etc. concluded the race. To arouse public interest and to give the race a funny character, famous South Tyrolean™s from politics, sports and culture participated, among them the chairman, the city councillor for traffic and environment, two Olympic medal winners (ski and high diving), a famous woman runner and the director of the city theatre. Gadgets, like cookies with the bike logo imprinted, should raise the sympathy for alternative traffic forms.

The fastest, cheapest and healthiest mean of transport was the bicycle, followed by the public transport and walking, the car last. While by bike it took only 11 minutes to cover the distance, the car arrived 10 minutes later and took all in all 21 minutes. Even the bus was very fast and arrived only two minutes after the bike. Concerning the health, the bike is also the favourite: 1 hour biking through the city burns 420 calories, while bus and car driving consume only 70 respectively 140 calories.