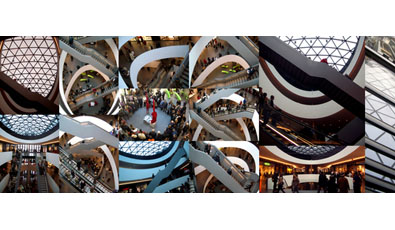 Opened in 2007, the Sihlcity development provides an example on how mobility management and land use planning can complement each other. The site was developed by Karl Steiner AG Zurich (now Sihlcity AG: Association of owners of Sihlcity).

Sihlcity is a multifunctional development composed by several buildings in the city of Zurich. On around 97,000 m² ground floor space different uses like retail, services, culture, cinema, hotels, fitness, wellness and few housing are located. Sihlcity has around 19,000 visitors per day and 2,300 working places.

Within the process of getting a building permission different transport solutions where fixed legally by contract: number of parking spaces was fixed on 850 and the parking had to be taxed, 600 bike parking spaces and a home delivery service by bike had to be installed by the landowners, and they were imposed to finance the improvement of a tramway line and a bus line for the first two years of operation. Furthermore an Access Contingent Model was requested, allowing the generation of maximum 8,800 car trips per day (to achieve after 5 years).

The development is placed outside of the city centre nearby one important highway ending at the city of Zurich. The development is also well connected to the regional train system (the railway stop is located at one of the main entrances of the area) and to the local public transport system (one bus and two tramway stops are located nearby the area). The area has furthermore a recreational function for the neighborhood which is a mix of working and living area. The overall number of parking spaces at Sihlcity is 850, which means 1 parking per 110m² ground floor space.

As part of the planning permission process, a range of mobility management measures were implemented.>Measures including parking charges and the installation of a bike home delivery service where imposed by the public authority. As a consequence the association of owners of Sihlcity implemented further measures like information services on the Web-Site about the accessibility of Sihlcity with all type of modes and no parking allowances for the employees of the shops within the development.

Extensions to existing public transport services (both local tram and bus) were simultaneous introduced. These were initially financed by Sihlcity and then subsequently through local public transport companies.

The number of generated trips is regularly monitored and reported by the Sihlcity AG to an independent organization which controls the reported numbers and informs the public authority about the ongoing development of car trips. The most of the indicated mobility management measures are organized by dedicated persons within the Sihlcity AG. Latest data obtained at the end of 2008, shows

Overall the case study highlights the importance and impact of mobility management measures (in conjunction with public transport improvements) can play in restricting and rerestricting and replacing car use in multipurpose development attractor sites.