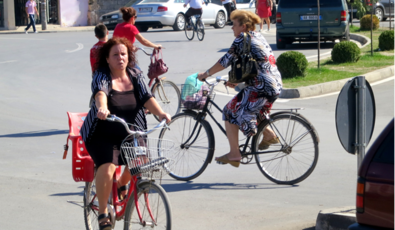 The town of Shkodra in North Albania is a living but fragile demonstration of the sharing of urban streets between cyclists and car drivers. Will forthcoming urban mobility planning defend or marginalise this tradition?

This case study asks whether a city with an economy in transition that is experiencing increasing car traffic should:

The historic town of Shkodra  in North Albania, with114,000 residents, is facing this challenge. The issue of ‘sharing streets versus segregation’, came up as a major urban mobility dilemma while conducting the SUMP project MOBALB and participating in the STEER CHAMP project on cycling cities.

Shkodra’s modal split is currently remarkably ‘active and shared space driven’ with a 44% walking and 29% cycling share in the city centre. Approximately 70% of all active trips in compact Shkodra are less than 2 km. Car ownership is relatively low with 145 registered cars per 1,000 residents and a 24% car travel share in the centre. There’s gender equity in cycling and cycle use is widespread and popular amongst all age groups. Due to the dominance of active modes, the overall travel life style in the centre is relatively relaxed and it has a traffic calming effect on travel behaviour. Participants in the bicycle policy audit for Shkodra mention that visiting car drivers are surprised to see the mutual respect between pedestrians, cyclists and drivers.

Pressure on this sharing street culture is, however, rising due to increasing car traffic. Responding to the 2011 MOBALB household travel survey, Shkodrans almost unanimously wanted to see improvement to their cycling network and infrastructure. Emerging user complaints refer to the lack of respect for traffic rules and in curbing speeding. As a result, first steps in cycling network development are being taken. However, some previous experiments with painted cycling lanes in the centre did not quite result into the envisaged behaviour of drivers and cyclists being expected to keep to their designated territory. Cyclists don’t let their behaviour be ruled by paint or stretches of special pavement unless speeding cars force cyclists to reroute onto safer urban street sides.

There is an understanding in Shkodra that cycling network modernisation requires segregated cycling measures on the national main roads leading to the city and proper safety improvements on crossings on the ring road (BYPAD Shkodra 2011, action plan).

However, when it comes to cycling measures in the inner city and within the inner urban boulevards and street network, there is less unanimity. Pro-segregation traffic planners tend to opt for segregation of travel modes based on a strict road categorisation scheme; while sharing street supporters defend the sharing space option for the city centre within a car access restricted and traffic calmed SUMP perspective. At this point, good practice from other medium sized towns who have chosen car access restriction should be taken into consideration.

The dilemma is identified as follows: is Shkodra’s city centre within the ring road considered part of the overall public domain or the urban road network? Each of these options affects the design of the urban streetscape and thus urban travel behaviour.>The issue is related to the longer term vision on urban (mobility) development for Shkodra and, ultimately, related to the vision on social behaviour in public space.

Shkodra aims to defend its cycling reputation and is therefore seeking the best way forward. The following key points for preserving the high cycling mode share and the sharing urban streets culture are taken as important elements of a SUMP:

Shkodra is a candidate for development of various urban mobility scenarios, the ‘cycling city scenario’ being one of them.

This Shkodra ‘sharing urban streets’ case appears to be common to medium and small sized inner towns in Central and Southeast Europe as reported by the ‘Kenniscentrum Shared Space’ project from the Netherlands. Most municipalities respond to growing traffic levels in the centre while denying cycling user needs. Denial is a cause of marginalisation of the cycling culture and its subsequent decline. Other local authorities have opted for a segregation regime for cyclists without accompanying car restriction measures. This leads to on-road frustration for all. The preferred option for cycling cities is their rapid shift to tailor made car access restriction combined with pro- cycling, walking and public transport measures. All the considerations outlined lead to the same conclusion: cycling culture is best defended within an integrated sustainable urban mobility SUMP approach.

Contributions on Eltis about the demo in Shkodra: