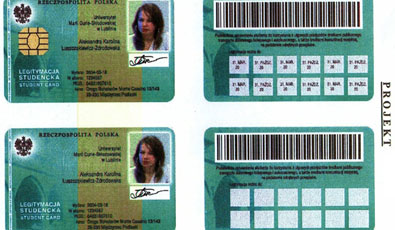 To ease the burden on students, who are required to carry amongst other things, student ID, library, and cash-cards, as well as travel passes, a new multi-purpose electronic ID card was introduced in 2005, for students studying at Poznan Universities.

As in most universities, many Polish students, apart from their ID card, are required to carry numerous other cards including library, credit and travel cards, both when on and off campuses. In 2005, the Polish Ministry of Education introduced a scheme to swap the old student ID cards with new electronic ones (SELS). For many countries (i.e. UK) Electronic Student Cards are nothing new, but none of them combine student cards with travel passes, proof of age/identity and cash/credit cards. The new SELS card can be also used as an identity card in different information systems at the University, can be a carrier for a digital signature or even a carrier of data for different loyalty programs.>

Poznan Universities in co-operation with the main public transport company in Poznan (Miejskie Przedsiebiorstwo Komunikacyjne w Poznaniu - MPK) have introduced a project of combining SELS with bus/tram pass. The SELS card can be loaded in the same way as regular bus pass. The new ID cards are issued by the Universities and are slightly more expensive than the old ones (SELS - 17 PLN; Old Version - 5 PLN) but they are harder to falsify it and more resistant to damage. To use it as a bus pass, a special application has to be made to the MPK. The card is personalised at the same time it is produced, is free of charge and requires no deposit.

In October 2006, 35,000 new cards were issued to all first year students and is currently been rolled out to all students. All Poznan Universities, apart from the Academy of Fine Arts, have joined the scheme and released the new electronic student cards. The new student ID cards are as yet no fully functioning cash cards as negotiations with banks are still ongoing, but this issue will hopefully be resolved soon.
Topic:
Collective passenger transport
Archive
Country:
Poland
City:
Poznan
Contact:
Michael Carreno
Keywords: