Save the kindergarten. bring your bikes! - cycling campaign in Plovdiv. Bulgaria 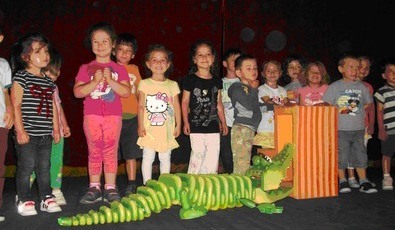 How could you make all the children in a kindergarten arrive by bike or scooter? The kindergarten “Majchina Grija” in Plovdiv, Bulgaria shows us a simple way to do this.

The overwhelming increase of children brought to kindergarten by car makes the situation for other children - who are walking and cycling - more difficult. The problem of safety prevents parents getting to the kindergarten using active travel modes - creating a vicious circle which should be stopped. Therefore a campaign has been designed and implemented that encourages, in a playful way, children and their parents to travel to kindergarten as cyclists.

At the start of the campaign, the kindergarten staff scripted a theatre play and invited professional actors to perform it. The protagonist in the play – the Crocodile – does not like cars because they pollute the air and get in his way when he is playing outside. Because he sees cars around the kindergarten, he wants to attack the kindergarten the next day and in order to stop him, the children have to surround the kindergarten with their bicycles and scooters, which they will use to travel to travel there in the first place.

So, despite the rainy morning, all the children wished to come to the kindergarten by bicycles or scooters.  Parents escorted their children there and surrounded the building with the bikes and scooters as the crocodile had wished.  Once it was clear the crocodile was not coming, because the kids surrounded the building, they had fun with their bikes and scooters and then met with two traffic officers. The officers talked about traffic safety and safe cycling and answered questions that the kids had. Each kid received a star because he or she came to the kindergarten by bicycle or a scooter and because they did something to improve air quality around the kindergarten. At the end of the day, there were presents and games for each group of little cyclists.

Based upon the pilot campaign, the surrounding and protection of the kindergarten with bicycles and scooters will become a regular event, held on the last day of every month.