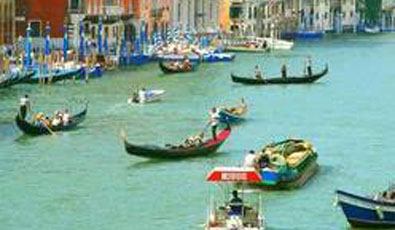 This measure focuses on integrating the municipal police control centre with the ACTV public transport operations centre in order to optimise traffic in the lagoon.

To assist transport services and optimise water traffic in the lagoon through the integration of the Municipal Police control centre (under construction) and the Actv operations centre (already working for the company’s vessels) with an “external” system.The need to set up a joint centre arises because the Municipal Police centre under construction and the functioning Actv centre are dedicated to specific traffic sub-systems, and cannot be used for overall management of the water transport system, because of the sensitivity of the data handled and the safeguarding of privacy. Furthermore, the possibility of obtaining information about the general water traffic situation will provide complete data for simulations and consequent traffic control and wake reduction regulations.

The work involves:1. Acquisition and installation of hardware, work station for auxiliary control centre, external communication system.2. Development of software, connection with auxiliary control centre.3. Updating the Actv operations centre and implement ingthe functions necessary for interface with the new joint centre.4. Modifying the Actv data processing software so that it can be used on the new simulation and control applications.5. Testing of the system.6. Communication campaign for potential external users (transport companies etc).7. A hardware and software training manual.

The hardware for the joint centre was purchased.The necessary software was purchased and prepared. The “Development of software and related adaptations” was completed in June 2007. Software and other adaptations were carried out by two local research and consultancy companies: ECOTEMA for the City of Venice part and THETIS for ACTV part.The City of Venice boats (circa 50 boats) were connected to the control centre and the control centre has thus been tested on these boats. The database for the public transport boats was inserted into the Municipal Police programme. During the meetings with ACTV an agreement protocol between the two partners that permitted the conclusion of the activity was reached and it was decided that in 2006, ACTV would install six onboard GPS systems which would conform to the necessary standards. The boats are made of iron which could have an impact on the system due to electromagnetism so they were tested.>The installation of GPS-GPRS systems in the new waterbuses and the replacement of the new technologies in the old waterbuses were completed in order to provide the possibility to integrate the ACTV system with the City of Venice system. The feasibility study for the connection of the control centre with ACTV and other public traffic was carried out.The ACTV operation centre was updated and the necessary functions for interface with the new joint centre were implemented.THETIS provided the software which made the integration of the ACTV system with the Municipal Police system possible. However, since 2002 ACTV had been carrying out a satellite control project to monitor the entire public transport fleet (buses and waterbuses) and found that the software bought for this purpose could also be used for the MOBILIS measure, with some adaptation necessary for the integration of the ACTV and Municipal Police control centres. € 50.000,00 was enough for these adaptation activities. As a result, in order to extend the GPS-GPRS system to older waterbuses which would have been excluded from the project but are important as they are in circulation, the remaining adaptation to software budget was transferred to “adaptation of hardware”.The integration between the ACTV system and the Municipal Police system was completed and tested in October 2007, as shown during the Venice Site Audit.The waterbuses can now be tracked in both the ACTV and Municipal Police’s operational centre and the final control of the ACTV operative centre took place in June 2008.Evaluation activities were carried out yet.The training courses for the Municipal Police personnel were concluded in March 2008. The training courses of the ACTV personnel were concluded in June 2008. The manual for the ordinary and extraordinary maintenance of the system was produced by ACTV in March 2008.Please note that this measure was managed by the CDG TALV and by ACTV. The CDG TALV ceased to exist at the end of January 2007 and therefore the measure and its budget have been transferred to the City of Venice.