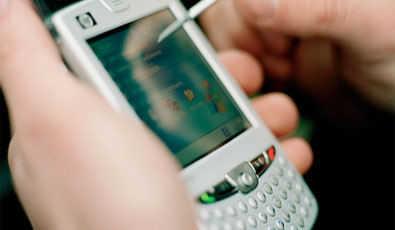 By using the GPS (satellite) and GPRS (mobile phones) techniques a small delivery firm have been able to optimise transports and reduce unnecessary trips. The control centre does get updated positions of the vehicles twice a minute, enabling them to deal with fast unplanned city distribution. Photo credit: 215 215

The objectives are to install a satellite based system in the delivering cars and vans. But also to reduce pollution, fuel and other unfriendly chemicals. The measure will also lead to change in the environment for the traffic-dispatch in form of less stress and more control.Developments of new technique that easy and quickly can report the environmental benefit of co-ordinating the freights. The measure has a high demonstration value for SME’s dealing with fast “unplanned” city distribution.

A satellite based system has been installed in delivering cars and vans. This was followed by installation of handhelds, for a more efficient two-way communication between the traffic-dispatch and vehicles. Developments of new technique that easy and quickly can report the environmental benefit of co-ordinating the freights.GPS-positioning system has been purchased and installed in 20 vehicles, during this process the traffic dispatch was educated. Three parts are included in the satellite-based system: Positioning, Communication and Registratio>By combining GPS technique with existing programme for logistic and new software, the frequency for co-ordination of goods has increased. It is also possible to report the environmental benefit for each of the costumer that will be made by the co-ordination.

The GPS system was installed in November 2005 and has been a huge success. The average driven distances have been lowered and the coordination on the delivery cars has improved radically. The staff are very satisfied with the new tools. The measure is now completed and closed.

The installation of a satellite based system in delivering cars and vans led to a more efficient courier service. On average, the total number of tasks per day for all four drivers were 40.3 in 2004 and 41.5 in 2005, a small increase of around 3% overall. On the margin this means that less cars and distance is needed for the same number of tasks which reduces pollution, fuel and other unfriendly chemicals; and changes the environment for the traffic-dispatch in form of less stress and more control.
Topic:
Urban freight/city logistics
Archive
Country:
Sweden
City:
Malmö
Contact:
Ulrika Gunnarsson
Author:
Ulrika Gunnarsson
Keywords: