Safety and Mobility Optimisation for sustainable Transport and Health (SMOOTH) in Kaunas. Lithuania 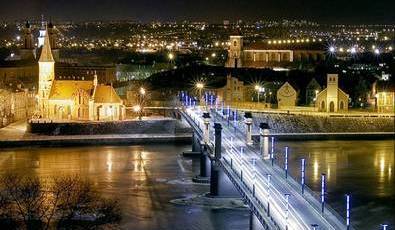 SMOOTH" in Kaunas aims to reduce car use, increase safety for pedestrians and cyclists on the streets and promote public transport choices. This three year (December 2009 - November 2012) project is partly EU-funded.

SMOOTH is an ambitious project. It brings together a number of different initiatives aiming to improve the attractiveness of soft transport modes and their interconnection with public transport. A key output of this project will be a "project handbook", allowing replication of SMOOTH project actions throughout Europe. Kaunas has used past experience of communication with educational institutions in the project "BUSTRIP“, increasing road safety in areas around primary and secondary schools.

One of the aims was to encourage the use of public transport in Kaunas by raising awareness about use of the e-ticket; Another part of the project was to prepare a feasibility study on the problems of transport in the city centre.

During this project, Kaunas city developed safe travel to school plans in 15 schools and designed and implemented safety measures in each of the listed schools, including installation of pedestrian crossings. Particular measures were also designed and implemented in order to improve cycling facilities in Kaunas (new paths, parking stands). Special public transport trips were organised after events at the Kaunas Zalgiris arena, in order to promote public transport use. Road safety training events are being organised for children with A. _ikevi?iaus Traffic Safety School. Many other activities are also planned.

Results of analysis show that there are many more safety issues than were expected by municipal officers. Kaunas increased the safety of pedestrians and cyclists near Kaunas city schools in the city centre and travelling by public tansport became more attractive. This year Kaunas is planning to continue modernisation of pedestrian crossings near schools, and to organise road safety training for children with A. _ikevi?iaus Traffic Safety School. The project ends in November 2012.
More information about the Smooth project: http://www.smooth-project.eu/