Safe river crossing for pedestrians and cyclists in Kraków (Poland) 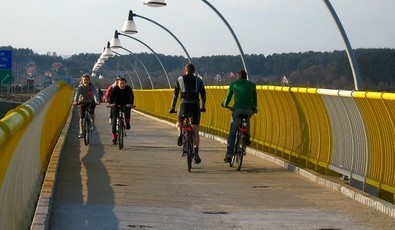 In 2008 a new footbridge was built over the Vistula River in Kraków. Running parallel to a bridge carrying dense car traffic within a ring-road of the city, the new construction separates walkers and cyclists from motorised transport and, thereby secures greater comfort for non-motorised travellers.

The new footbridge was built in order to merge two popular cycling and walking routes into one, the so-called ‘Route Tyniecka’. These routes are particularly important for Kraków as the 26km-long area stretching along the Vistula (from the Benedictine monastery in Tyniec on the west side to the Cistercian monastery on the east side of the river) is of a very high aesthetic value with its many cultural and historical attractions. The new construction ensured greater safety for cyclists and pedestrians who had, previously, illegally used a technical footpath on the motorway bridge. The road running over the motorway bridge, which is part of the A4 (E40) European corridor and also a ring-road of Kraków, was made to comply with the requirements of a motorway - its lanes having been widened and footpaths removed.

The footbridge over the Vistula River is a seven-span construction and 284m long (including the wings) and 4.2m wide. The barriers on both sides are more than 1.5m-high, bow-shaped and bend toward the centre. This improves the safety of cyclists by preventing bicycle handle bars hooking on the railing. The bridge is illuminated at night. Shortcomings in the design forced the developer to make changes that, in the preparatory stage of the project, were unforeseen. For instance, due to drainage problems around the pillars of the weir, it was necessary to use concrete panelling techniques under water. These installation and reinforcement measures in the riverbed were carried out by a team of divers.

The steel components of the bridge arrived on site in October 2007 but the only way to install steel elements at the support sites was to use a longitudinal pulling technique. Due to the (up to) 40m span of the components, the application of masts with shroud-guys was necessary. The whole pulling process, combined with further consolidation of components and assembly of the water-supply system, lasted approximately five months. The total cost of the investment was approximately € 1m.

The new footbridge has become a very important link in the grid for recreational cycling in Kraków, as it connects two frequently used bike trails on either side of the Vistula. Being able to cross the river at this location is important as the nearest alternative routes across the Vistula which are accessible for tourists are 5 to 7km away. With the new footbridge, the ‘Route Tyniecka’ has been completed, becoming one of the most popular and scenic recreation trails in Kraków, attracting runners, cyclists, walkers and skaters - and even skiers in the winter. Bridge designers stress that the most interesting and - at the same time - the most difficult stage of construction was to place two pillars on the weir, directly in the bed of the Vistula.