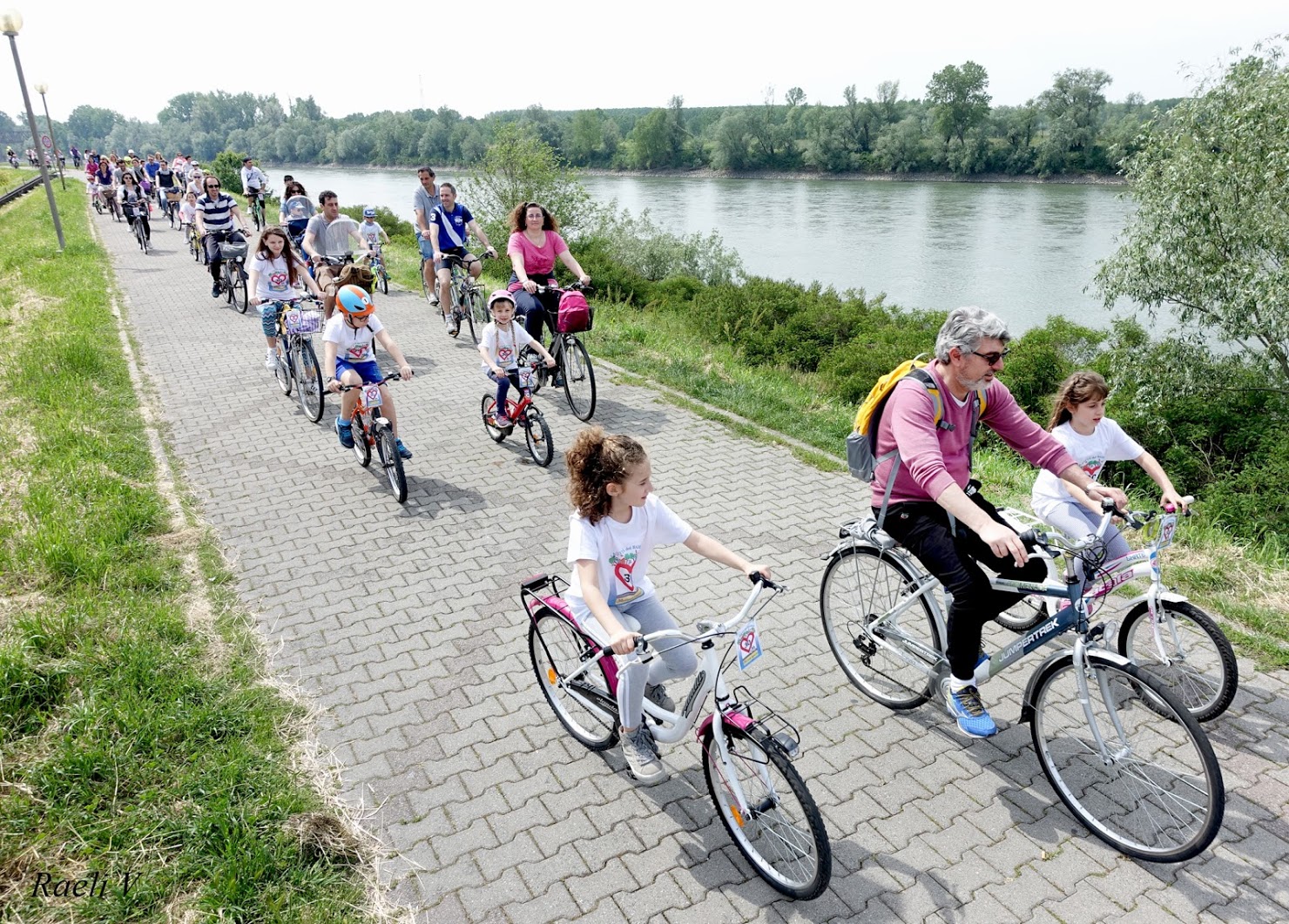 It has been some years now that in Italy citizens are taking initiatives aimed at sustainable mobility and urban regeneration. Since 2014, Comitato Slow Town of Casalmaggiore organises demonstrations and experiments designed to encourage pedestrian and bike mobility in the city and the regeneration of public spaces creating 30 km/h areas (called Zona30) and safe routes for pedestrians and bikers, particularly for children on the route from home to school or school to downtown.

Casalmaggiore (in the province of Cremona, in Lombardia) has 15 000 inhabitants and lies alongside the river Po. Like many small and large Italian cities, it has a 'desertified' downtown because over the last 20 years have been recklessly built shopping centres in the outskirts and new residential districts, resulting in large land occupation. In the centre about 70 shops were closed and 1 500 apartments are uninhabited, 30 per cent of the total.

These things led to urban decay in the downtown area and danger on its streets, because they've no longer been occupied by people, but by vehicles people use to move faster from home to work and home to shopping centres. Facing these issues Comitato Slow Town began to experiment with new ways of using the inner city streets.

The most common way the citizens move is by car and the road system has been designed over the years keeping that in mind. The few facilities for cyclists in many cases do not meet the traffic code regulations and are dangerous. The streets in downtown are not large enough to allow the existence of bicycle lanes without removing the parking spaces for automobiles and in several streets, the parking spaces are made on a portion of the sidewalk, when there are sidewalks.

Piedibus, an initiative aimed to walk children to school and running for about 10 years now, has three lines that connect the centre to the primary school thanks to the volunteers and involves 40 pupils (5 per cent of the total).

This Piedibus, despite being very useful for the children and families involved, did not solve the many problems existing on the road to school.

In 2014, thanks to a notice of Fondazione Cariplo aimed at ‘Comunità Resilienti’ (so-called communities that are resilient despite many aspects of locally identified environmental difficulties) and the involvement of an architect specialising in Zona30 (Matteo Dondè from Milan), it was possible to develop and test a 30 km/h speed-reducing project in a street of the centre through the installation of urban and green furniture on the roadway which has created a slowdown chicane.

This experiment, which originally was intended to last 2 days, because of the great success and as a result of a petition that in a few days, reached more than 1 000 signatures, remained for the next 3 months. Comune di Casalmaggiore then commissioned to Architect Dondè a final project which in 2 years has unfortunately remained on paper due to lack of funds.

At the end of 2014, Comitato Slow Town presented also to the municipality a school mobility plan inspired by the experience ‘Meglio a piedi’ in the canton of Ticino in Switzerland. A very articulate plan that, among other suggestions, proposed to use the main bank of the river as the primary safe way to school and close some streets to traffic near the school complex during entry and exit hours. The plan was put to the test by the Comitato Slow Town in May 2015 with the participation of local schools and the assistance of the local police.

Given the success of the test and the requirements the plan required (a further project implementation and light infrastructure such as a dirt road), the Comitato Slow Town has organised in May 2016 a new exhibition entitled ‘La città dei bambini’ (children's town). With the involvement of private construction companies and ‘Botteghe di prossimità’ (shops displaced along the track) what was missing was realised.

In the three-day event ‘La città dei bambini’ it was inaugurated the ‘Tangenziale dei bambini’, a pedestrian/cycle path which is spread over a couple of kilometres along the main bank of the river Po. The route is an extremely safe route because it is closed to vehicular traffic and therefore suitable as road to school.

It is an actual ring road with traffic signs, in every way suitable for children. It will be used by children to get to and from school, the gym, the library, and the most attractive places in the downtown area, surrounded by beautiful scenery and sheltered from traffic risk and smog.

‘Tangenziale dei bambini’ has all the features of a true ring road: it is peripheral, unites all the main sites of downtown and is equipped with exits (nine).

This ring road allows children to stay clear of the downtown street risks, especially in the rush hours of the schools when 1 000 people (parents and pupils) have a hard time weaving in and out of curves, dangerous crossings, double parked cars, lack of sidewalks and crosswalks.

The new route, siding river Po, not only avoids all these risks and is as long as the other ones (15 minutes inside nature) but is proposed as alternative transport by all means. The Piedibus will profit so much from this additional track that from next year one of the lines could be the ring road.

For the project has not been necessary the construction of something new but only to adapt an existing route in two simple steps. The realisation of a dirt road to connect the main bank to the city and give continuity to the whole track. This dirt road was designed and built thanks to private companies in the area that cared for the safety of children. The project was submitted to the municipality that gave the authorisation to perform the works on its areas.

Linked to 'Tangenziale dei bambini' there is the MetroMinuto project. The ring road has nine exits located by the stairs and descents down the main bank. Every exit has a sign indicating name and number of the exit, images of relevant destinations along the route, metres and minutes needed to the destinations. Each exit is marked with a different colour and has simple graphics, suitable for children.

MetroBottega completes the mobility project of Comitato Slow Town, allowing everyone to enjoy downtown without using the car, starting from the main bank with 'Tangenziale dei bambini', Metrominuto and its nine exits/routes.

MetroBottega is a map showing the main downtown streets grouped in 10 different coloured lines. This 'pedestrian open sky metro' will help citizens finding the products and services they need and 'Botteghe di prossimità' .

To the nearest “Botteghe” to be known also by who doesn’t live in Casalmaggiore and who would like to stop and by something, by passing through the city.
“MetroBottega” of Casalmaggiore is nothing more than the evolution of “Metrominuto”, adopted by the city of Pontevedra, in Spain and then retaken in Italy, by cities like Firenze, Modena, Cagliari. In this case, it is a tool that has not only the purpose of incentivizing the use of feet for short movements, but also the purpose of promoting the “Centro Commerciale Naturale” (Natural Shopping Centre), represented by the nearest “Botteghe”. Sadly, during these years, these ones have suffered both the arrival of the shopping centres and the decrease of consumption due to the economic crisis.
The binomial of the “Mobilità sostenibile pedonale/ciclabile” (Sustainable foot/cycle mobility) and the “Rigenerazione urbana” (Urban regeneration) of public spaces will need to go at the same place in the next years. Indeed, it was seen that where the aims were soft mobility and road security, the “Botteghe” have increased, streets are full of people, the community meaning is strong and sociality and live quality of the inhabitants is high, whereas where was let more public space to car (by occupying reserved sidewalks and cycle paths with car very often), the citizen fabric has deteriorated and depleted, by changing the city centre into a desert of closed activities, dirty sidewalks due to the lack of daily maintenance and where the flourish of micro-criminality has fitted this hole.
This change need to be done by starting from the Children and the new generation who are not yet inured by routine and can better appreciate pedestrian and cycle ways. The beginning is road security in order to give an opportunity to the Children to gain independence in their own movements and to be the protagonist in first person of the change of the adults.
Indeed the “Tangenziale dei Bambini”, the “Metrominuto” and the “MetroBottega” can represent the keystone to change from the bottom the movement dynamics of people in the cities.

Results
The experimentation has had a great success and the light infrastructures placed (the signs) and the dirt road are currently remaining at their place, even if the experimentation was 3 days long. Classes have now a safety alternative of movement by foot and by bike along the school-city centre paths.
The four school involved took part at the event/experimentation with enthusiasm and the acceptance of the Associations of the territory, which have been united on the topic of Children and Safety, was huge.
During the days of the event, classes began to use the “Tangenziale” and the dirt road in autonomy, in this way the second classes have completed their programme “Conoscere il territorio” (Knowing the territory), which is provided by the POF (Piano di Offerta Formativa – Education Provided Plan), the first classes had visited the Library during the following days, by using the “Tangenziale” and the exit 6 of the Library , according to the recommended itinerary. This has confirmed how the path of the “Tangenziale” and the proposed exits meet the needs of mobility and safety of the students.
The participation of the parents for what concerns the itinerary home-school
has been slower and it still is, because the common habit of car use is hard to oppose. Therefore, for the future it will be important the parents involvement and the application of the “Piano di Mobilità scolastica” (School Mobility Plan), which incentivizes the home-school movements by foot and by bike and disincentivizes the car use. The closing of the streets near the school complex, as it happens for the best European experiences of school sustainable mobility and the disagreement of behaviours against the rules of the road of the parents-drivers, could be a valid aid by picking the most sustainable choices. Other initiatives can help the change such as the organisation of weekly biketoschool every Friday. Children are very happy to move with independence and they are the best teachers for the parents.
The collaboration and the communication with the City Administration is all to build. In a politic perspective contributed, we count on asking the Administration a contributed itinerary of urban regeneration, restraint of the speed in the inner city and safety of the home-school and school-centre paths. It will be necessary the building of the culture of sustainable mobility, the changing of habits and the winning of disinterest.
The incentive of this type of activity has also a number of relevant economic returns for the city cash desks, which won’t be forced anymore to provide compulsorily shuttle buses to schools in order to move the classes for just few hundred meters.
Like for “Zona30”, the project has allowed us to assert that the direct experimentation of initiatives of restraint of the traffic and of a different urban mobility, leads to a better understanding and acceptation of the best way and allow to generate an instant, but also long-lasting change. Therefore the keyword is EXPERIMENTATION.

Future aims
The actualisation of a PUMS (Piano Urbano di Mobilità sostenibile – Urban Plan of Sustainable Mobility), a “Piano di Mobilità Scolastica” (School Mobility Plan) with secure paths, the incentivisation of movements by foot and by bike of the resident inhabitants and the regeneration of public spaces for an improvement of the life quality.