Road pricing in Flanders: a field trial in Leuven. Belgium 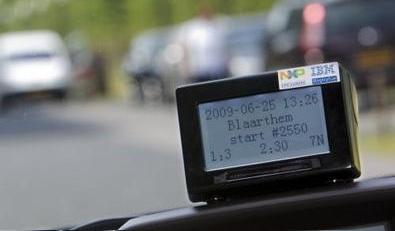 A field trial for a smart road pricing scheme as a personalised instrument to steer mobility behaviour was carried out in Leuven. Thanks to state-of-the-art technology and a well-cooperating consortium, the mobility behaviour of 34 test persons has been effectively changed.

Flanders is one of the most prosperous regions of Europe. Unfortunately this also means that big parts of the region are heavily congested. Congestion causes 6 million lost hours annually which sums up to a total cost of €250 million.

A possible measure to manage the demand for mobility is road pricing. The Flemish Government committed in its government statement to at least investigate the specifications of such a scheme for the whole region. That intention led to quite some controversy in Flanders. However, a first field trial was carried out in Leuven, the capital of the province of Flemish Brabant. The Flemish government now aims to carry out an official government-led test project.

The field trial in Leuven was a private initiative of a consortium led by T!NC (ITS Belgium). Other consortium members were NXP, Magicview, IBM, NSL, Mobistar, Touring, Transport & Mobility Leuven and the City of Leuven.

The goals for the city were threefold: the city wanted to position itself as an innovative platform for mobility projects; to understand better the mobility patterns in and around the city; and to think about a smart road user charging scheme as part of a bundle of measures which aim to increase liveability and traffic safety.

The smart road pricing scheme was conceived as a personalised instrument to steer mobility behaviour. The overarching aim was to reduce the external costs of car driving in city centres. Those external costs are caused by scarcity of infrastructure, accidents and environmental pollution. In terms of internalising these external costs in Flanders, existing taxes are too low. They do not incentivise drivers enough to reduce external costs. With the road pricing scheme, people are encouraged to think about the social cost of car driving instead of the private cost. However, basing a fee only on the external costs doesn’t necessarily make the system smart. What makes it smart is that it also distinguishes between places (road type), moments in time (peak and off-peak) and vehicle types (cylinder capacity and ecoscore).

Basically, the system works in the following way: an on-board unit (OBU) logs relevant data such as time and place (via GPS) and sends this data via GPRS to a back-end server. This server computes a tariff (based on the model above combining external costs with place, time and vehicle type) and creates an invoice for the end user. The end user can also see the current tariff on the on-board device during the trip.

In the field trial there were 4 main phases. After a preparatory phase, a baseline was established during a given reference period to be able to determine whether or not the system has the potential to change mobility behaviour. In the third phase the field trials went into practice via a competition with a reward (gift voucher in proportion with the changed mobility behaviour). After the test phase, users were followed for 2 months without the reward to determine whether or not their changed behaviour would last.

The main conclusion is that the system has proven to work and is ready to be used. Almost 11,000 trips and 100,000 km were travelled and logged. The average speed per trip was 35km/h.

There was a measurable change in mobility behaviour. The test users avoided driving during the peak period (60% drove during off-peak periods). They also avoided cutting through residential areas during peak hours (5% less).Test users reported to have worked at home more and to have travelled with public transport more than they were used to. So, in general car traffic became more dispersed. People drove less during peak hours, drove more in off-peak hours and drove later during the evening peak period. 50% of the test users improved their personal mobility behaviour but three quarters relapsed again after the competition finished.

The results were in line with the mobility policy of the city of Leuven. They not only strengthen this policy but also give policy-makers a powerful tool to steer mobility behaviour. A smart road charging scheme can be used as an instrument in a group of measures (parking policy, optimisation of traffic lights, land use).