Reviving one of Copenhagen's most important thoroughfares (Denmark) 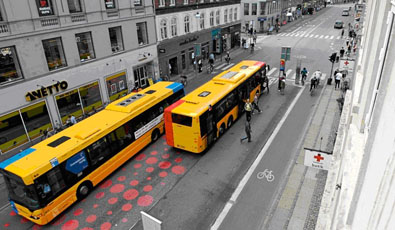 Norrebrogade is a busy main street serving two functions - the first one, as a major commercial centre with over 300 shops, cafes and restaurants the second one - as a major traffic artery. Neither function had been catered satisfactorily. The street was revitalised by widening the pavements and bike paths and extending the length of bus-only lanes.

Norrebrogade is a unique street that was characterised by seemingly endless compromise between conflicting approaches. The pavements were narrow for much of the road’s length, leading to conflicts between cyclists and people getting on and off the buses. To solve the problem, in 2006 the City of Copenhagen decided to develop a plan to regenerate Norrebrogade. This work was carried out between 2007 and 2008, when the municipality invited a number of local interested parties into a dialogue, after which the final proposal was developed.

The overriding goal was to make the street and the space around it more functional to meet the needs of the various parties, which was to be done by a prioritising approach. The following three goals were the focus of the plan:

The total plan has been implemented in stages consistent with budgetary allocations for this implementation. The first stage was comprised of initiatives to reduce the volume of traffic. It also involved widening the pavemenst and cycle lanes where need and potential were greatest, and creating small urban spaces at a number of side road junctions. This required the car traffic to be reduced by 50% to free up space for pedestrians, cyclists and buses.

The first stage of the project was implemented in 2008. Reduction in the volume of traffic has been achieved by implementing a number of traffic measures. These included the creation of bus-only lanes and better facilities for pedestrians to sit and spend time, more tree and plant guards, the creation of more space at side roads junctions, loading zones for goods delivery to the shops and more cycle parking facilities. This resulted in improved pedestrian flow on the pavement, where bus passengers had previously stood and waited. At the same time, the cycle lanes were doubled in width on some stretches to overcome congestion.

The major initiatives of stage one are listed below.

Planned implementations (Stage 2-4)
Work on the stretch from Queen Louises-bridge to the Runddel will be undertaken from Sept. 2010 to Nov. 2011. A political decision will be made in early 2011 on improvements to the stretch between Runddelen and Norrebro Station.

During stage one, from October to December 2008, car traffic fell on individual stretches on Norrebrogade by between 30% to about 80%.

Buses
The reduction of car traffic on Norrebrogade produced a considerable saving in journey time for buses. The 27,000 passengers who use the buses every day on that stretch of road between Queen Louise’s Bridge and Norrebro Station reached their destination 3% more quickly than when buses shared the road with cars this in turn generated annual savings of three million kroner (approx. € 402,800).

The municipality’s assessment of stage one has suggested that it is possible to reduce the volume of car traffic by 50% without negative consequences for the surrounding residential streets. The assessment also showed that pedestrians and cyclists felt considerably safer and buses were more punctual, which saved bus passengers about 100,000 hours annually.