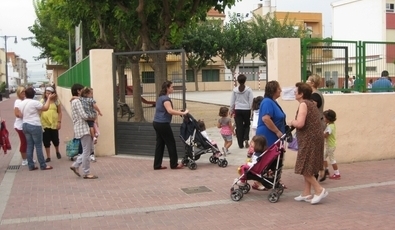 In 2007 the City of Alcudia in Spain pedestrianised the roads around the main entrances of four local schools, with real benefits for parents and children walking to school.

In 2005, the City Council of l’Alcúdia near Valencia in Spain carried out a mobility study in order to improve the quality of life of the citizens in relation to their daily travel. One of the main points of emphasis was around the entrances to the town’s schools. As all the students have the same timetable, at the time of entry and at the departure time, many cars join at the same time at the entrance of the school, provoking traffic jams, noise, pollution and danger for children, who have an unpredictable behavior and reduced visibility. As the risk existed, parents had the perception that is safer to accompany their children by car that they go on their own on foot, increasing the use of the private car and its negative effects.

To face the problems of the traffic in the entrance of the schools, the mobility study proposed to increase the pedestrian zones around the entrances of the 4 schools in l’Alcúdia. This action had the objective to reduce the traffic and the risk of accidents, encouraging the parents to let more autonomy to their children.
For the implementation of the pedestrian zones around the schools, the City Council had to resolve and redesign traffic circulation, reducing the traffic in the school environment, decreasing at the same time the noise levels in the classrooms. Consequently, the number of parking spaces close to the schools was reduced.
The pedestrian zones extend right across the road outside each school, and for a distance of around 45 metres either side of the school gate, on average. They have provided space in which to plant trees, transforming the entrance of the schools in pleasant environments, and it has allowed to the bars and restaurants surrounding the schools to establish terraces, creating a lively zones. After the introduction of the pedestrian zones, the proportion of children being driven to school was only 30%, whilst 65% walk to school, and of course all children must walk the final 40-50 metres because it is now not possible to park directly outside the school gate any more.

The pedestrian zones have allowed the children to go to school more safely, increasing their autonomy. This fact has reduced the use of the car for this purpose, having a more fluent circulation and reducing the emissions and noise levels in the streets. Children have changed their habits, moving to a more sustainable and healthy way of transport.

The City Council is still working on the sustainable policies to go to school. During the years 2011 and 2012, safety routes and walking buses have been designed and implemented in the frame of the Active Access project www.active-access.eu. These actions aim to promote this sustainable mode of transport among the school community.