Reducing the reliance of cars in Freiburg (Germany) 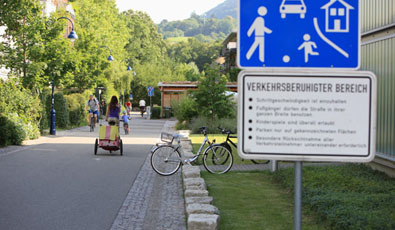 The development of the Vauban residential area highlights good practice in sustainable development with close integration to a high-quality public transport network.
Context
Since the 1960s Freiburg has experienced strong growth in both population (23 per cent) and employment (30 per cent) and, consequently, increased private car use. In attempt to alleviate this growth, the city has been planned to exploit the availability of the tram network and new lines have been constructed to serve areas of new settlement in attempt manipulate modal split. One example of these policies in practice is the residential development of Vauban. Vauban is located on the site of a former French military base on the southern edge of the city, with a total area of 42 hectares, accommodating about 5 000 residents.
In action
In 1997 the implementation phase begun (due to be completed later in 2006), with the following strategic aims:
The public transport connection to Vauban was significantly improved in 2003 with the installation of a new tramline. The first line connects Vauban with the Merzhauser area, running through the city centre and was completed in 2006. The second line began construction in 2005 with the aim of connecting Vauban to the wider regional transport system.

A particular feature of the new development has been the very proactive approach to community involvement and a number of working groups have been set up and regular open meetings are convened with residents. New residents are deliberately targeted through marketing campaigns to help expand the positive public transport culture. An important element of this approach is an ongoing effort to educate local people in the benefits of the ‘high-quality’ public transport network to correspond with wider policies discouraging car use and promoting sustainable transport modes.

Households can choose to nominate themselves as car-free households, pay a one-off fee of €3 500 (and annual administrative fee) to the ‘Car-reduced Living Association' to purchase land (otherwise that would be used as parking spaces) for their creation of community spaces, such as playgrounds, sports facilities or parks. In contrast, residents who own cars are required to purchase a car parking space from the municipality property owner, costing around €17 000 (about one-tenth of the actual housing unit costs).
The whole residential area is traffic-calmed, while the larger part of the development is car-free, and private cars must instead be parked in one of the two parking garages on the edge of the development. Since 2006 the area has also been served by the tram. As a result many people have decided to live without a car and instead use public transport and bicycles to get around.
In order to calm traffic in and around the development, 30km zones and home zones seek to, as far as possible, free the streets from parked cars. Although it is permitted to take a car right up to the front door of each building – in order to allow loading and unloading, for example – parking places are nonetheless not offered right by each building, but rather on the edge of the area in two common garages.  In this way the walking distance to the car is increased and so people think twice about whether or not their car is really necessary for their trip, or whether in fact they would be quicker travelling by tram or bike. A further important way of calming car traffic is to largely eliminate through traffic by car.
While on foot or by car, one can travel on direct routes throughout the development; by car one is limited in choice of route and routes are often circuitous. This plays an important role in improving road safety and children can play on the streets free of traffic danger. A further supporting aspect is that here and there in the development restaurants and shops can be found, so that the area is not simply a residential dormitory; rather, it offers a multi-functional mix of uses all within a short walk of each other. The concept of a car-free development has a firm footing in Freiburg, but still it is not something that was realised overnight. The development of the site took many years from the purchase of the land by the city in 1992, through an architectural competition to the beginning of construction in 1999 and the completion of works in 2010.
Results